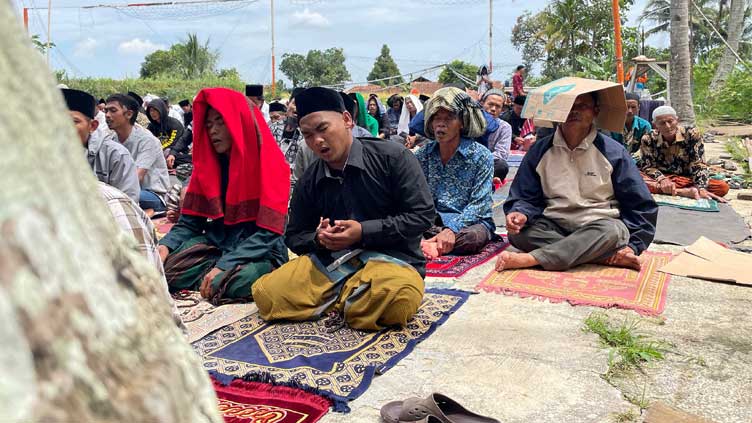 CIANJUR, Indonesia (Reuters) - Hundreds of Indonesians prayed out in the open next to rice paddies and in the streets on Friday, as the death toll from an earthquake that flattened their town in western Java rose to 310.

Muslim cleric Muhamad Jamhur led a congregation in prayer in an outdoor volleyball court just 200 metres (0.1 miles) from a mosque whose walls were left cracked and windows shattered by the shallow 5.6-magnitude quake that hit the town of Cianjur, about 75 km south of the capital Jakarta, earlier this week.

"After the disaster, we are still afraid. So we had to move here in this volleyball court, not in a mosque. I asked the congregation to stay on guard because disaster might strike again," Muhamad, 52, said.

Hundreds of aftershocks have rattled the mountainous region, where grieving and traumatised residents are sheltering in tents, awaiting supplies of food, water, and medicines that have been slowed by heavy rains and landslides.

Food vendor Asep Hidayat, who like many others lost his house in the quake, said he was thankful to be able to join in the prayers, even if not in a mosque.
"Prayer still needs to go on, even though we are in a shelter, prayer is an obligation," he said.

Over 20 people remain missing. Suharyanto, head of Indonesia’s disaster mitigation agency, said on Friday that the search would continue, although rescuers said hopes of finding them alive were slim.

Clad in orange shirts, rescuers continued to dig through dirt with shovels in a landslide-hit area where authorities on Friday found nine bodies.

Indonesia is one of the world’s most earthquake-prone nations, regularly recording strong earthquakes offshore where fault lines run.

Monday’s quake was particularly deadly because it struck a densely populated area at a depth of just 10 km. Poor construction standards also caused buildings to collapse, leading to many deaths, officials said.