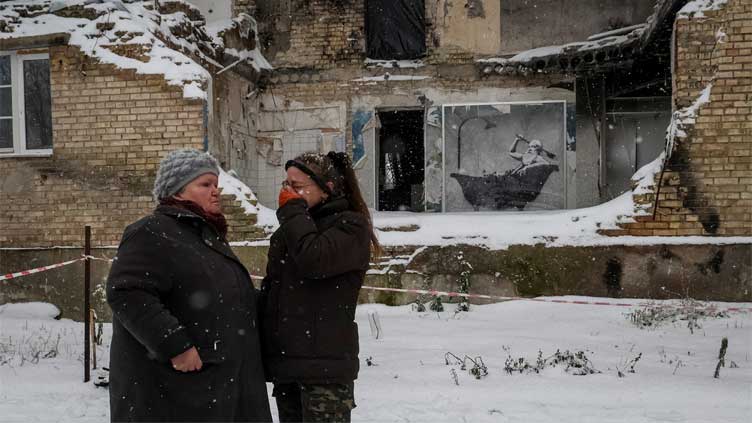 HORENKA, Ukraine (Reuters) - As theyhead into a cold winter, residents of a bombed-out Ukrainian village say they appreciate a warm bath in a mural painted by graffiti artist Banksy.

The mural, showing a man scrubbing his back in a bathtub, is on the ground floor of what remains of an apartment block hit in a Russian attack in March in Horenka, northwest of Kyiv, once on the front line where Russia’s assault on the capital was halted.

"For me, it means washing off all the dirt. The dirt of the Russian Federation...," Tetiana Reznychenko, 43, told Reuters as snow fell around her. "And this drawing makes me feel as if I have cleansed myself of the dirt that descended on us."

The mural is one of one of seven that Banksy has confirmed painting in Ukraine. Reznychenko said she had given Banksy’s team a mug of instant coffee in her apartment, as it was cold when the artist came to paint the mural.

She has a wood stove in her apartment but no electricity, heating or running water as winter sets in.

"Winter has begun, and we don’t know what will happen next. Firemen brought us non-drinking water ... but it will freeze unless we move it inside," she said.
Despite the problems, she and her neighbours remain defiant.

"Ukrainians adapt to everything. No light? No problem. There are candles, there are alternative sources of electricity, there are power banks," said neighbour Olena Kulynovich.

"When the neighbours have electricity, we go to them, charge the phones and the power banks. No water? That’s ok. Even if the government doesn’t help, we managed to organise the delivery of water."