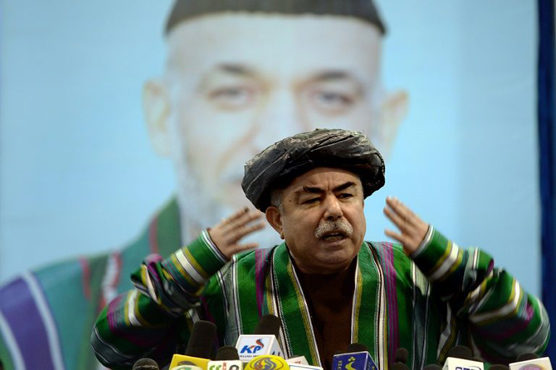 Dostum, a powerful ethnic Uzbek warlord linked to multiple human rights abuses in Afghanistan, fled to Turkey in May after he was accused of raping and torturing Ahmad Ishchi. Photo: AFP

Dostum, a powerful ethnic Uzbek warlord linked to multiple human rights abuses in Afghanistan, fled to Turkey in May after he was accused of raping and torturing Ahmad Ishchi, a former governor of northern Jowzjan province, in 2016.

He allegedly abducted Ishchi in Jowzjan and kept him hostage in his private compound for several days, where the captive was said to have been tortured and sodomised.

Dostum has denied the accusations.

With Dostum still abroad, ostensibly for medical check-ups and family reasons, seven of his bodyguards were convicted over the incident last Wednesday but are not yet in custody.

"Every one of the bodyguards will serve a five-year prison sentence. They have not been detained yet -- they will be arrested soon," a Supreme Court official, who asked not to be named, told AFP.

Dostum’s spokesman and aides could not be immediately reached for comment.

The men were not present when a Kabul court handed down the decision and are now in Jowzjan, Ishchi told AFP.

"The punishment of these bodyguards is a positive step but I am not happy or satisfied with the length of their prison sentence -- they should serve more years in prison," he said.

"The real culprit and perpetrator is Dostum and his men -- they should be prosecuted."

That Dostum has not been prosecuted over the incident is seen by many as further evidence of how Afghan warlords and strongmen operate with impunity.

Observers have been sceptical the government would sack or bring charges against Dostum, who has survived all previous allegations of abuse.

"The government is eager to find a way to make this case go away but it’s a command and control issue," Gossman told AFP.

"Who gave the order? Who should be held accountable? Getting to the truth of what happened here is essential for genuine justice."

Despite his human rights record, Dostum was invited to join the National Unity Government in 2014 in an attempt by President Ashraf Ghani to attract the support of his mostly ethnic Uzbek constituency.