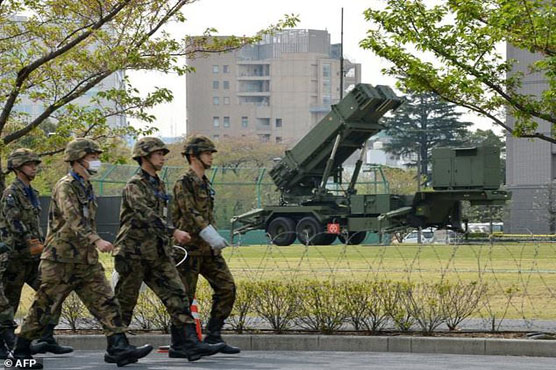 Nationalists like Abe dismiss the constitution as a humiliating relic imposed by US occupiers after Japan's defeat in World War II, while North Korea's recent firing of two missiles over the country in less than a month has focused minds on security. Photo: AFP

(AFP) - Japanese Prime Minister Shinzo Abe’s long-held dream to change the pacifist constitution got a big boost this weekend as his conservative coalition won a crucial two-thirds majority in a snap election.

Nationalists like Abe dismiss the constitution as a humiliating relic imposed by US occupiers after Japan’s defeat in World War II, while North Korea’s recent firing of two missiles over the country in less than a month has focused minds on security.

But many Japanese feel a strong attachment to the constitution’s peaceful ideals and changing it sits close to the bottom of their to-do list.

Any tentative move towards re-militarisation would trigger alarm bells in China and the Koreas given Japan’s history of military aggression in the region.

Here are some facts about the document and the tough job Abe will have in trying to change it:

Q: What’s so unique about the Japanese constitution?

A: It was drafted by Americans when they occupied Japan after 1945 with an eye to quashing Tokyo’s ability to engage in another conflict. Its most unique feature is Article 9, which says that Japan renounces war and use of force as means of settling international disputes, and bars it from maintaining a military force.

Despite this, Japan actually has one of the world’s best-equipped militaries, called the Self Defense Forces (SDF), to defend the nation in case of attack.

Q: How and why does Abe want to change the constitution?

A: Abe wants to change the wording of the constitution so it would affirm Japan’s right to have a military -- some scholars say the SDF should technically not exist, although it has for decades.

The premier said he would keep the clause that prevents Japan from waging an offensive war.

While his proposed changes may seem minor, enshrining the status quo is a small victory toward Abe’s eventual goal of turning the SDF into a regular standing army.

Abe previously brought in controversial legislation that allows the SDF to fight alongside allies in certain circumstances.

Critics say the constitutional changes are not needed since the Self Defence Forces have long been accepted by the public.

Q: What are the steps to changing the constitution?

A: The current rules impose high hurdles on amending the constitution, so Abe will have his work cut out.

A draft amendment can be tabled only with the support of either 100 members of the lower house of parliament or 50 upper house lawmakers.

That draft needs to win two-thirds of the vote in each of the two chambers before being put to a national referendum. It only becomes official if a simple majority votes in favour.

Q: Do Japanese people want to change the constitution?

A: Public opinion is split on the issue, but few see it as a priority.

Survey after survey has shown that the majority of voters still want to keep the pacifist ideals outlined in Article 9 as they are, despite Pyongyang’s provocations and an increasingly assertive China.

A poll by the top-selling Yomiuri newspaper this month showed 35 percent of respondents agreed with the prime minister’s bid to officially recognise Japan’s military in the constitution, while 42 percent opposed the idea.

A: His party and like-minded conservatives won enough lower house seats to start the process of drafting a new constitution or making changes to the existing one.

But even pro-change lawmakers are divided on the specifics, which could hold up movement on the issue.

Conservatives are also cautious to make sure that their first attempt at changing the constitution will end in success.

Abe himself struck a cautious tone in the afterglow of his landslide victory, pledging that he would not use his two-thirds majority to ram constitutional changes through parliament.