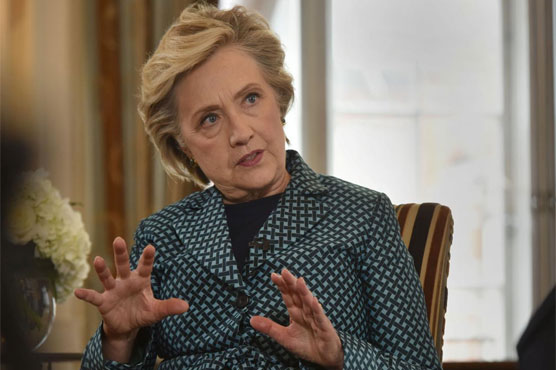 Clinton lost last year’s presidential election to the insurgent Republican despite having decades of experience in politics.

Tension has been running high for months as the White House’s new incumbent and the North’s Kim Jong-Un trade threats of war, with Trump dubbing Kim "Rocket Man" and being called a "dotard" in response.

In recent months Pyongyang has carried out multiple launches of missiles potentially capable of reaching the US mainland, and its sixth nuclear test.

But Trump’s tit-for-tat with the young, autocratic ruler of the isolated regime only dents Washington’s credibility and helps Kim bask in global attention he seeks, the former secretary of state told a forum in Seoul.

"I am worried about some of the recent actions from the new administration that seem to raise tensions. Our allies are now expressing concerns about America’s credibility and reliability," she said.

Trump’s escalating verbal threats have sparked concerns of potential conflict on the peninsula, especially after he warned this month that "only one thing will work" on the North, without elaborating further.

Such "cavalierly threats to start a war are dangerous and short-sighted", Clinton said, adding the regime would be "thrilled" to get the "personal attention of the leader of our country".

Without once mentioning Trump by name, she also said she was "very concerned that the new administration is draining the government of the expertise" in diplomacy over the North.

"There are few Asia experts of senior level left at the State Department," she said.

Alienating Washington’s allies in Asia, where the clout of the world’s number-two economy China has been rising to rival the US, could have "grave consequence", she said: "If we pull back, it leaves a vacuum for others to fill."

How to curb Kim’s weapons ambitions is expected to be a major focus of Trump’s trip to Asia next month that includes Tokyo, Seoul and Beijing among its stops.

US deputy secretary of state John Sullivan, who was also in Seoul on Wednesday for talks with his South Korean and Japanese counterparts, defended Trump’s comments.

"The regime in Pyongyang is unpredictable and not transparent," he told reporters. "We and our allies have to be prepared for any eventuality. For that reason the president... said all options are on the table."

Clinton, the former first lady who served as the US’ top diplomat from 2009 to 2013 under president Barack Obama, suffered a shock defeat to Trump in the 2016 election.

She felt "so responsible" for the defeat, she said, but also blamed multiple factors including sexism, misogyny and Russian intervention she recounted in her recent memoir "What Happened".

Moscow, she said, was "trying to destabilise every democracy".

"It’s not going to end at 2016 American campaign... it’s an ongoing threat," Clinton said, describing the suspected Russian campaign as "so successful... and very effective propaganda".

Trump’s presidency has been overshadowed by allegations that his campaign team colluded with Russia during last year’s election.

Moscow has faced accusations of state-sponsored cyberattacks on countries including Germany and France to influence election results -- allegations it has steadfastly denied.