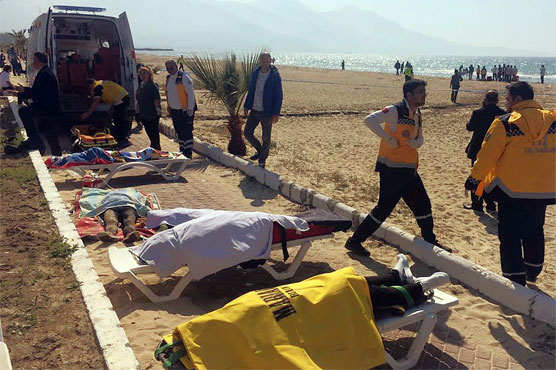 Thirty-eight migrants were rescued but search and rescue efforts are in progress.

ISTANBUL (AFP) - Four people drowned and up to 20 were missing on Friday after a fishing boat carrying migrants sunk off Turkey’s Black Sea coast, reports said.

Thirty-eight migrants were rescued but search and rescue efforts are in progress to find 15-20 people still missing in the incident off the Kefken district of the Kocaeli province east of Istanbul, the Anadolu and Dogan news agencies said.

It was not clear where the boat had left from and where it was headed.

Turkey has emerged as a hub for migrants from trouble zones around the world including Syria, Iraq and Afghanistan seeking to move to the European Union.

In 2015, around a million people undertook risky sea journeys to cross the Mediterranean to Europe, mostly to Greece from Turkey over the Aegean Sea.

Thousands died in the perilous crossing. Responding to international pressure, Turkey tightened its sea borders and cracked down on migrant smuggling rings as part of a 2016 deal with the European Union.

The numbers of migrants crossing the Aegean has now dwindled. But increasing numbers, now rising to hundreds within a month, are now trying to cross the Black Sea from Turkey to EU member Romania.