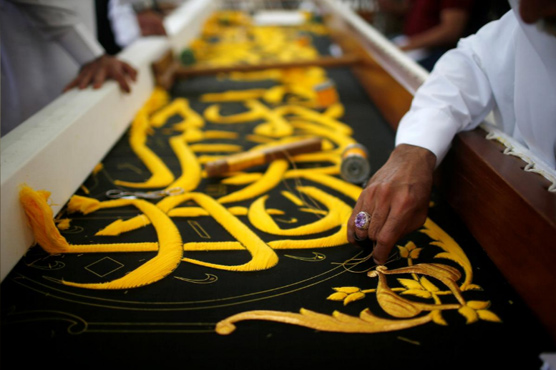 The covering cloth for the Kaaba (which stands in the Masjid al-Haram), is known as Kiswa. It is changed on the 9th day of Zilhaj. A man embroiders the Kiswa, a silk cloth covering the Holy Kaaba. Photo: Reuters

(AP) - The annual ceremony to change Ghilaf-e-Kaaba was held at Masjid al-Haram in Makkah on Thursday.

Millions of Muslims gather in the Saudi city every year for the Hajj pilgrimage, an event marked by celebrations stressing the importance of the spirit of sacrifice.

Workers change the #kiswah (the cloth that covers the #Kaaba) in #Makkah, #SaudiArabia — AP/Courtesy photos pic.twitter.com/0qUzmCziDT

The governor of Makkah, senior Saudi officials and other significant personalities attended the ceremony.

According to a private news channel, at least 150 kg of pure gold and silver, along with 670 kg of silk has been used in making the cover for the famous mosque, rumored to be worth $600,000.

Known as the kiswa, the cloth is woven from silk and cotton and adorned with verses from the Koran. A new one is made each year to be placed on the Kaaba in Mecca’s Grand Mosque Muslim Haj pilgrimage. Photo: Reuters.

This year, around 2 million faithful, from around the globe, are performing Hajj. They will leave for Waqoof-e-Arafat today, which is the Rukan-e-Azam of Hajj.

The pilgrims spent Wednesday night at Mina, under the open sky, before moving to the rocky hill where Prophet Mohammed (Peace Be Upon Him) gave his final sermon 14 centuries ago.

#Kaaba Kiswa: 670kg of the finest silk in the world, 120kg of gold plated silver & 100kg of silver are used for the embroidery of the #Kiswa pic.twitter.com/RKQr6Roevc

The pilgrims will gather to hear the Hajj sermon, delivered by the grand Mufti of Saudi Arabia, at Masjid-e-Nimra. After sunset, the pilgrims will leave for Muzdalifah (located halfway between Arafat and Mina) where they will stay for a night and offer prayers.

One hundred thousand police have been deployed to secure pilgrimage sites. Hajj is one of the five pillars of Islam, and every capable Muslim must perform it at least once in their lifetime.