Belt and Road Forum for International Cooperation opens in Beijing 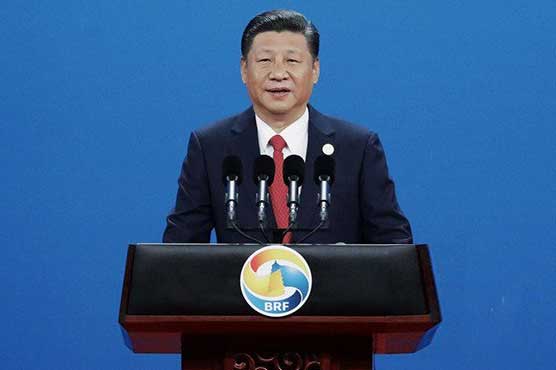 Twenty-nine foreign heads of state and government are participating in the forum.

BEIJING (Web Desk) - While delivering a keynote speech at the opening of the two-day Belt and Road Forum for International Cooperation in Beijing, Chinese President Xi Jinping said Sunday the Belt and Road should be built into a road of peace, prosperity, opening up, innovation and connecting different civilizations.

"The ancient silk routes thrived in times of peace, but lost vigor in times of war. The pursuit of the Belt and Road Initiative requires a peaceful and stable environment," said Xi.

"We should foster a new type of international relations featuring win-win cooperation; and we should forge partnerships of dialogue with no confrontation and of friendship rather than alliance," he said.

He called for fostering the vision of common, comprehensive, cooperative and sustainable security, and creating a security environment built and shared by all.

The president urged the Belt and Road to be built into a road of prosperity.

"In pursuing the Belt and Road Initiative, we should focus on the fundamental issue of development, release the growth potential of various countries and achieve economic integration and interconnected development and deliver benefits to all," he said.

He called for joint efforts to improve trans-regional logistics network and promote connectivity of policies, rules and standards so as to provide institutional safeguards for enhancing connectivity.
"We should build an open platform of cooperation and uphold and grow an open world economy," Xi said.

"We should jointly create an environment that will facilitate opening up and development, establish a fair, equitable and transparent system of international trade and investment rules and boost the orderly flow of production factors, efficient resources allocation and full market integration," he continued.

The forum, the highest-level international meeting since Xi proposed the Belt and Road Initiative in 2013, gathers 29 foreign heads of state and government leaders as well as delegates from some 130 countries.

Prime Minister Muhammad Nawaz Sharif alongwith a high-level delegation including all the four provincial chief ministers, is representing Pakistan in the forum.