Korean plane goes off runway in Japan; no injuries 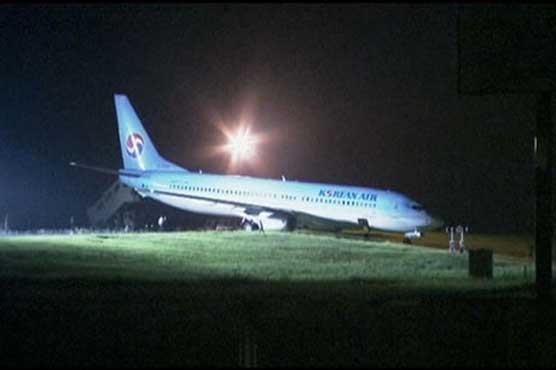 The incident is the second in a month involving a South Korean airline.

TOKYO (AP) - A South Korean passenger jet overshot the runway at an airport in northwestern Japan, but no one was hurt, local television reported.

Korean Airlines Flight 763 landed at about 8 p.m. but could not come to a complete halt before the end of the landing strip and the Boeing 737 to rest with its front half in a grassy area at the end of the runway, the report said. The flight originated from Seoul s Incheon International Airport.

"I saw that the landing strip wasn t going to be enough, then "bam!"

it made a sudden stop," a passenger told TBS, without giving his name.

Japanese transportation authorities told the broadcaster there were no injuries.

The incident is the second in a month involving a South Korean airline. On July 6, an Asiana Airlines flight crash-landed in San Francisco, killing three people and injuring dozens.