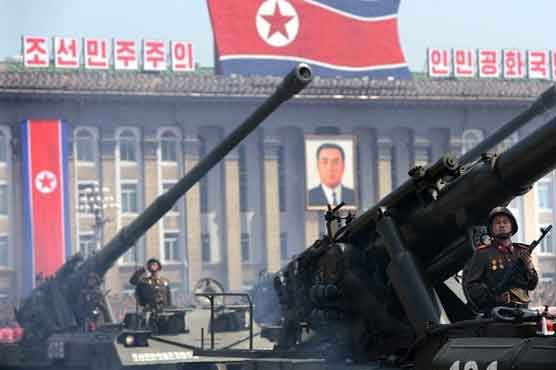 Satellite imagery has revealed more than 10,000 North Korean soldiers practising for the parade.

SEOUL (AFP) - North Korea has mobilised a variety of missiles in preparation for a massive military parade later this month to mark the 60th anniversary since the end of the Korean War, a report said Friday.

It quoted a South Korean military source as saying short and mid-range missiles were seen installed on mobile launchers. The South's defence ministry declined to confirm the report.

Military officials in Seoul are paying great attention to whether the North will present its newest missiles capable of carrying nuclear warheads in the parade, Yonhap said.

The parade is in preparation for the July 27 anniversary since the end of the Korean War, celebrated by the North as the "Day of Victory", it said.

In February, the North's ruling communist party unveiled plans to hold a military parade, mass rallies and a show of fireworks for this year's celebrations.

The two Koreas are still technically at war because the 1950-53 Korean War ended with an armistice rather than a peace treaty.

The North has threatened to shred the 60-year-old armistice.