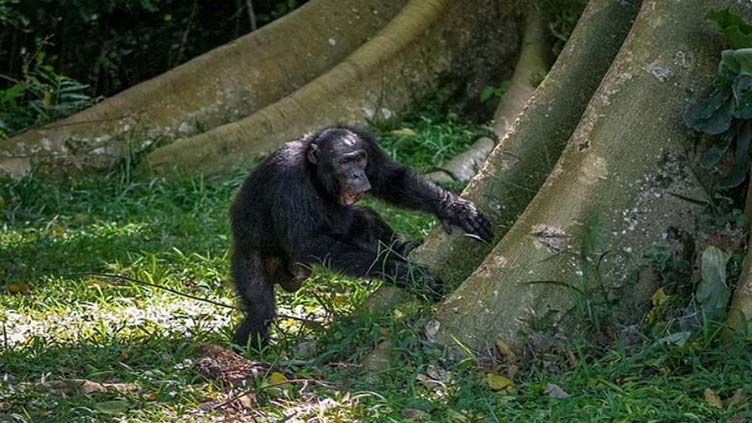 PARIS (AFP) - The drummers puff out their chests, let out a guttural yell, then step up to their kits and furiously pound out their signature beat so that everyone within earshot can tell who is playing.

The drum kit is the giant gnarled root of a tree in the Ugandan rainforest -- and the drummer is a chimpanzee.

A new study published Tuesday found that not only do chimpanzees have their own styles -- some preferring straightforward rock beats while others groove to more freeform jazz -- they can also hide their signature sound if they do not want to reveal their location.

The chimps mostly use their feet, but also their hands to make the sound, which carries more than a kilometre through the dense rainforest.

The drumming serves as a kind of social media, allowing travelling chimpanzees to communicate with each other, said Vesta Eleuteri, the lead author of the study published in the journal Animal Behaviour.

The PhD student said that after just a few weeks in the rainforest she was able to recognise exactly who was drumming.

"Tristan -- the John Bonham of the forest -- makes very fast drums with many evenly separated beats," she said, referring to the legendarily hard-hitting drummer of rock band Led Zeppelin.

Tristan s drumming "is so fast that you can barely see his hands", Eleuteri said.

But other chimps like Alf or Ila make a more syncopated rhythm using a technique in which both their feet hit a root at almost the same time, said British primatologist Catherine Hobaiter, the study s senior author.

The research team was led by scientists from Scotland s University of St Andrews, and several of the chimpanzees are named after Scottish single malt whiskies, including Ila -- for Caol Ila -- and fellow chimp Talisker.

Hobaiter, who started the habituation of the Waibira group in 2011, said it long been known that chimpanzees drummed.

"But it wasn t until this study that we understood they re using these signature styles when they re potentially looking for other individuals -- when they re travelling, when they re on their own or in a small group," she told AFP.

The researchers also discovered that the chimps sometimes choose not to drum in their signature beat, to avoid revealing their location or identity.

"They have this wonderful flexibility to express their identity and their style, but also to sometimes keep that hidden," Hobaiter said.

Michael Wilson, a specialist on chimpanzees at the University of Minnesota who was not involved in the research, said the study s methodology was sound.

But he was not "completely convinced, though, that the drumming is sufficiently distinctive that you could reliably tell all individuals apart," because some patterns seemed very similar, he said, calling for more research.

While plenty of animals produce sounds we think of as music -- such as birdsong -- the research could open the door to the possibility that chimpanzees enjoy music on a level generally thought to only be possible for humans.

"I do think that chimpanzees, like us, potentially have a sense of rhythmicity, a sense of music, something that touches them on an almost emotional level, in the way that we might have a sense of awe when we hear an amazing drum solo or another kind of dramatic musical sound," Hobaiter said.

Most research on the culture of chimpanzees has looked at their tools or food, she said.

Next the researchers plan to investigate how neighbouring and far-off communities of chimpanzees drum in their own differing styles.

Hobaiter has already been looking at chimpanzees in Guinea, where there are very few trees to drum in the open savannah.

"We ve got early hints that they might be throwing rocks against rocks" to make sound, she said.

"Literal rock music in this case."