After string of adventures, ancient gold ring back in Greece 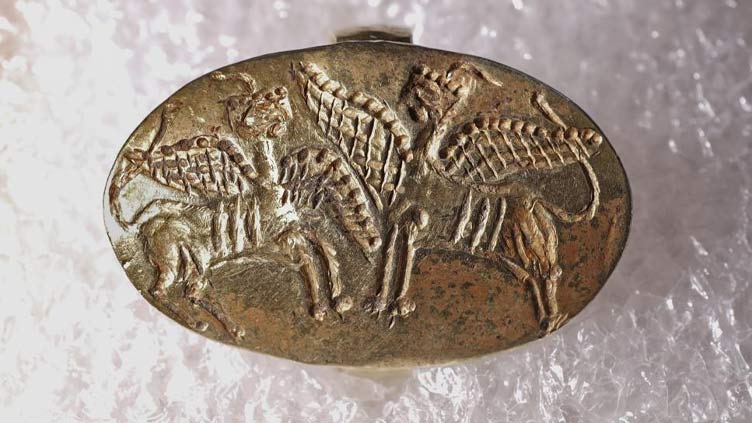 After string of adventures, ancient gold ring back in Greece

The ring was discovered in 1927 by Italian archaeologists in a Mycenaean grave.

ATHENS (AP) — A more than 3,000-year-old gold signet ring that was stolen from an Aegean island in World War II, crossed the Atlantic, was bought by a Nobel Prize-winning Hungarian scientist and ended up in a Swedish museum has found its way back to Greece.

It was the latest in a series of coups by Greek authorities seeking the return of works plundered from the antiquities-rich country — even though an initial effort by the Swedish museum to return the ring apparently fell between the cracks of 1970s bureaucracy.

The Greek culture ministry said Friday that the gold Mycenaean-era work from Rhodes, decorated with two facing sphinxes, was willingly returned by Swedish officials who provided full assistance with documenting the artifact and its provenance.

Greek experts confirmed the identification, and the piece was handed over in Stockholm by Vidar Helgesen, executive director of the Nobel Foundation, to which the ring had been bequeathed by the Hungarian biophysicist.

The foundation, which presents annual awards for outstanding achievement in several fields, had given it to the Museum of Mediterranean and Near Eastern Antiquities in Stockholm.

Greek Culture Minister Lina Mendoni thanked the Nobel Foundation and Swedish authorities for the repatriation, saying it “shows their respect for modern Greece and our constant efforts to fight the illegal trafficking of cultural goods.”

The ring, which would have been a status symbol for a local nobleman in the 3rd millennium B.C., was discovered in 1927 by Italian archaeologists in a Mycenaean grave near the ancient city of Ialysos on Rhodes. The southeastern Aegean island belonged to Italy until it was incorporated in Greece after WWII.

The Ministry of Culture and Sports said the ring was stolen from a museum on Rhodes during the war — with hundreds of other pieces of jewelry and coins that remain missing — and surfaced in the United States.

It was bought to the U.S. during the 1950s or 1960s by Georg von Békésy, a biophysicist and art collector whose collection was donated to the Nobel Foundation after his 1972 death and from there distributed to several museums.

The Nobel Foundation’s Helgesen said there was no doubt where the ring belonged.

“To us, it was obvious that the ring should be returned,” he said. “This artifact is of very great cultural-historical value for Greece.”

The Stockholm museum had initially identified the ring from Ialysos in 1975 and contacted Greek authorities, the ministry said.

“But it remained in Stockholm for reasons that are not clear from existing archives,” Friday’s statement said. The artwork will now be displayed in a museum on Rhodes.