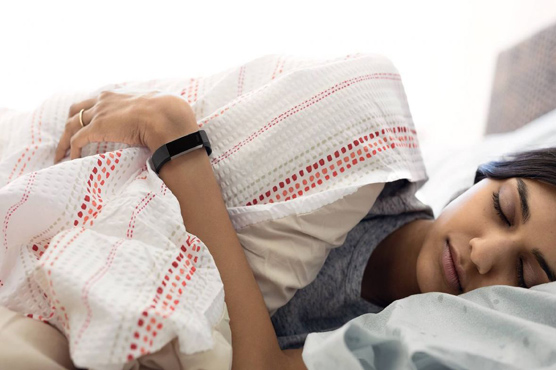 Negligence in having an adequate sleep has been linked to fatal diseases including cancer, diabetes, heart disease and reduced mental health among other health issues. Photo: Fitbit

In an interview to the Independent, Professor Mathew Walker, a leading expert and director of the Centre for Human Sleep Science at the University of California, Berkeley said that sleep deficiency affected “every aspect of our biology” and was widespread in modern society.

“I take my sleep incredibly seriously because I have seen the evidence,” said Walker.

And up till now the problem was not being taken seriously by politicians and employers, with a longing to acquire a decent night’s sleep often stigmatised as a sign of laziness, he added.

Sleep deficiency is demarcated as less than seven hours a night. The facets of modern life such as electronic items, lights, longer shuttles, television and computer screens, the muddling of the link between work and personal time, and several other features have paid to sleep deficiency.

Negligence in having an adequate sleep has been linked to fatal diseases including cancer, diabetes, heart disease, stroke, Alzheimer’s disease, obesity and reduced mental health in the midst of other health issues. To sum up, a dearth of sleep is killing us.

Professor Walker, who is formerly from Liverpool, said: “No aspect of our biology is left unscathed by sleep deprivation”.

“It sinks down into every possible nook and cranny. And yet no one is doing anything about it. Things have to change: in the workplace and our communities, our homes and families.”

“But when did you ever see an NHS poster urging sleep on people? When did a doctor prescribe, not sleeping pills, but sleep itself? It needs to be prioritised, even incentivised.”

“Sleep loss costs the UK economy over £30bn a year in lost revenue, or 2 per cent of GDP. I could double the NHS budget if only they would institute policies to mandate or powerfully encourage sleep.” Professor Walker added.

Professor Walker whose book Why We Sleep: The New Science of Sleep and Dreams is due out next month, said, he insists that he has a “non-negotiable, eight-hour sleep opportunity every night” and retains “very regular hours”.

“Once you know that after just one night of only four or five hours’ sleep, your natural killer cells – the ones that attack the cancer cells that appear in your body every day – drop by 70 per cent per cent, or that a lack of sleep is linked to cancer of the bowel, prostate and breast, or even just that the World Health Organisation has classed any form of night-time shift work as a probable carcinogen, how could you do anything else?”

Professor Walker said that the people, on individual basis are required to pay massive consideration towards sleep benefits, moreover the health workers, managers and politicians are also requisite to show a greater devotion to this problem.

“No one wants to give up time with their family or entertainment, so they give up sleep instead,” he said.

There is a trend to claim that one is requiring little sleep to function. Margaret Thatcher and Ronald Reagan were asked to continue on a few hours a night. As a result, in later life both settled with dementia.

“No one would look at an infant baby asleep, and say ‘What a lazy baby!’ We know sleeping is non-negotiable for a baby.

But that notion is quickly abandoned [as we grow up]. Humans are the only species that deliberately deprive themselves of sleep for no apparent reason.” He added.

Necessitating caffeine to stay awake during the afternoon or wanting sleep after the alarm goes off are the symptoms of shortage of sleep.

“I see it all the time. I get on a flight at 10am when people should be at peak alert, and I look around, and half of the plane has immediately fallen asleep,” Professor Walker said.

People should set an alarm 30 minutes before they should go to bed and begin to hang loose from that point, he suggested.

The NHS has warned that sleep dispossession can have “profound consequences on your physical health”.

“One in three suffers from poor sleep, with stress, computers and taking work home often blamed,” its website says.

“However, the cost of all those sleepless nights is more than just bad moods and a lack of focus.”

“Regular poor sleep puts you at risk of serious medical conditions, including obesity, heart disease and diabetes – and it shortens your life expectancy.”

“It’s now clear that a solid night’s sleep is essential for a long and healthy life.”