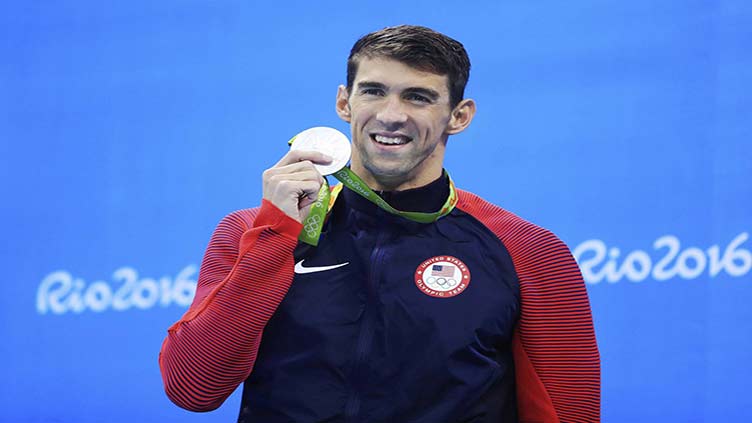 PARIS (AFP) - Olympic great Michael Phelps said he was  greedy  to hold onto his one remaining individual swimming world record faced with the threat of  hungry kid  Leon Marchand.

Marchand is not far off the 400 IM world record Phelps has held for two decades and trains with the Americans  long-time coach Bob Bowman.

The 20-year-old French swimmer posted the second-fastest men s 400m medley time in history with 4min 4.28sec to win the world gold in Budapest in August.

"Leon is one to watch" Phelps, 37, said at the "Demain Le Sport" (Sports Tomorrow) event in Paris.

"He s just a hungry little kid, he s eager to be the best, to break the world record, and obviously he s within a couple of 10ths of it, so...

"But hopefully, fingers crossed, I m going to be greedy and try and keep the record for one more year to go to 21 years."

"Time will tell. He s definitely equipped with a lot of tools," continued Phelps, who holds the all-time records for Olympic medals with 28 of which 23 are in gold.

"He s such a great racer. He reminds me a lot of myself with the competitiveness when you get into it, kind of dogfight in a race.

"It s all about tempo, stroke, he s with a great coach Bob who coached me my entire career, so he s in good hands.

"I m looking forward to seeing not only what he does at the world championships next year but also what he does here in Paris (Olympics)."

"I m happy I m not swimming the 200 fly any more because Milak would be crushing me. Watching him go 1.50 is impressive," said the American who retired in 2016.

But he believes Romanian David Popovici is the sports  rising star having broke the 100m freestyle record with 46.86 at worlds in August and closing in on the 200m freestyle mark.

"Popovici in my opinion he s going to be the first person to break 1.42 (200m free), that s a record that people thought was untouchable.

"If there s one person on the planet who will go below it s Popovici. It s just a matter of time before he swims even faster, the kid is 18."