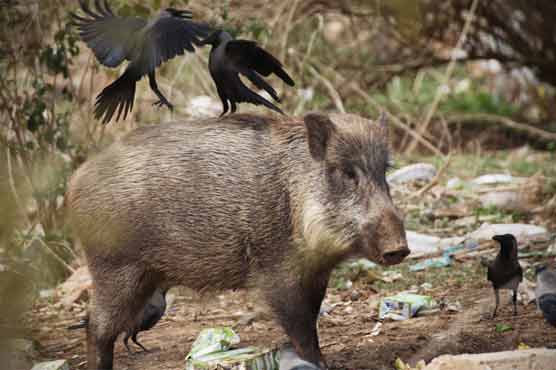 The citizens of different localities in the capital have complained of attacks by wild boars.

ISLAMABAD (Online): Wild boars have played havoc in several areas of federal capital including Rawal town, Rawal dam, Shahzad town and Morian due to non conducting of any operation against them.

The dense forests located in the rural areas of federal capital are infesting with these wild boars and they continue to roam freely in the populated areas and towns of Islamabad day in day out in search for their sustenance. They flock on the roads generally but park road crossing particularly has turned into their safe passage due to initiation of no action for their elimination by the concerned authorities.

Due to their thick presence and roaming on the roads, road accidents have become a common phenomenon and a phenomenal rise has been witnessed in such accidents stemming from unbridled movement of these savages.

“My father who is elderly person was driving his car on Park road and all of a sudden a flock of wild boards emerged from one side of the road and blocked it. In the struggle to pull out his car he was injured by these boars and was taken to hospital, said Ghulam Rasool, a resident of Rawal town.

A day back these wild boars made thrust into Rawal town in broad day light and continued wandering freely for several hours in the streets of the town. Several pedestrians and a motorcyclist were overtaken by them and they sustained fatal injuries.

The citizens have demanded immediate operation against the wild boards to pre-empt any fatal accident.