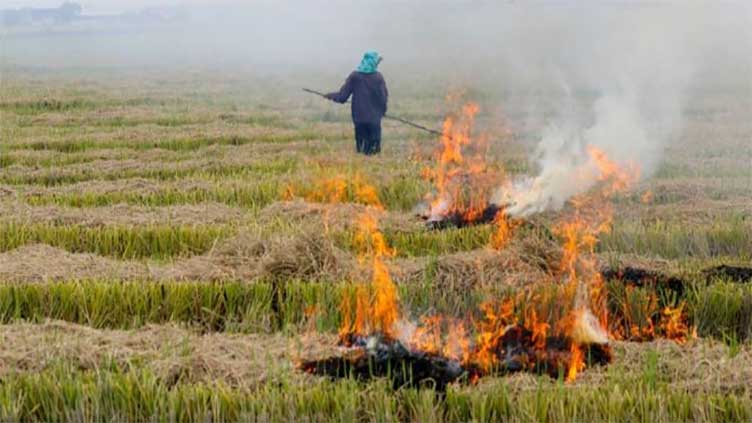 Known as a mixture of air pollutants – smog covers Lahore and other cities every year from November to March exposing people to serious environmental degradation and health hazards, complaining of fever, cough, headache, and body pain.

Although the provincial authorities claim to be on their toes during this season for taking corrective measures yet in many areas open burning of residue can be seen thus mocking these authorities without fear of any action.

“It seems like that there is no proper law enforcement mechanism in the province. Even when you enter Lahore or leave the city through M-2 and M-3, you can see farmers burning residue without any fear,” stated Rashid Mahmood who visited the city last week.

“As soon as you cross Sukheki on M-2 towards Lahore, you will come across an unwanted cloud of smoke emitted from agricultural land due to residue burning. On M-3 also, just 20 kilometers from Lahore towards Multan and up to Jaranwala interchange, all was covered with smoke,” he said. “It becomes even harder to breathe if you open the window glasses of your vehicle.”

“Who is responsible for these violations, where is the administration, and why concerned department officials are not on roam to check this phenomenon,” he questioned and demanded from the government strict action such violators who threaten human health.

The phenomenon of air pollution, smog, and resultantly contaminated water leads to significant environmental, economic, and social losses as well as exposing citizens to diseases like bronchitis, asthma, cough, allergies, and other serious diseases.

“Exposure to pollutants like PM, NO2, SO2, CO2, and O3 is injurious to human health. But, exposure to smog aggravates risk level much more than ordinary pollution,” stated an environmentalist Dr. Mehmood Khalid Qamar. “On November 8, Lahore touched a hazardous record level of smog with the Air Quality Index (AQI) touching 400 points.”

He also mentioned poor law enforcement as one of the reasons behind this nuisance and said, burning crop residue, dirty fuel sources in traditional brick kilns and factories, and old-existing urban transport systems are the typical causes of smog.

The burning of crop residue in open fields has also become a grave concern for climate change mitigation efforts. It is quite unfortunate that when the provincial government is busy in power mongering, people in the very outskirts of Lahore metropolitan continue burning their crops residue heinously adding to the already polluted atmosphere.

She, however, claimed to introduce much-needed modern Rice Straw Shredder and Happy Seeder technology in Sheikhupura and some other districts. “This is a multi-billion rupees initiative being jointly executed by Punjab and the Federal Governments.”

She hoped that this process would help avoid burning the paddy crop residue and convert it into organic fertilizer for boosting land fertility. “Hundreds of such shredder pairs and happy seeder technology have been provided to farmers.”

Commenting on this situation, Secretary Environment Protection Department (EPD) Punjab, Usman Ali Khan has informed that the government departments were working in close coordination to implement a joint action plan to tackle this issue.

“Four special squads of EPD in Lahore and four in other cities are operational, including the field teams,” he said. “From Aug 27 till Nov 08, strict action against 69 illegal operators has been taken across the province.”

“Similar action was also taken against 314 old technology brick kilns, sealing 192 and imposing Rs 11 million fines. No brick kiln is allowed to operate without Zig-Zag stacking of bricks and blower,” he said.

Meanwhile, EPD Director Assessment Nasim ur Rehman Shah also mentioned to a system of ‘Mechanized Management’ wherein Rs 300 million is being spent on the disbursement of 50,000 rice straw shredders and happy seeder technology. “Through these initiatives, we hope for positive results in days ahead.”

Although, the government is taking certain measures yet what is missing on the ground is the implementation of environmental laws.

Therefore, the government should expand its area of action to rural areas where the actual problem exists and push forward district-level bureaucracy for implementation of its decisions to generate desired results.