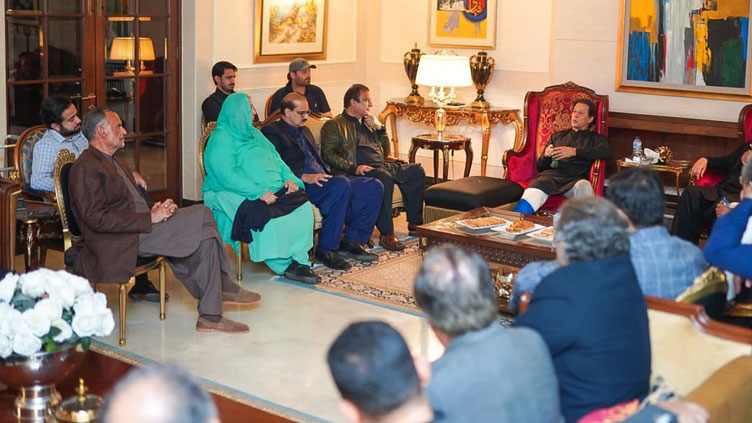 LAHORE (Dunya News) – The Pakistan Tehreek-e-Insaf’s (PTI) top brass on Monday said that the party’s leadership is willing to talk with the government if it has concerns about the elections.

After attending the PTI’s meeting, the party vice president and former foreign minister, Shah Mahmood Qureshi talked to the media, saying, "I and Asad Umar addressed the meeting over the long march. We staged our march in a peaceful manner. Imran Khan will head to Rawalpindi on November 26."

Urging the PTI’s supporters to come out of their houses on November 26 in time – due to the cold temperature, Shah Mahmood talked about the matter of FIR over the assassination attempt on the PTI chief, saying that the FIR was not registered according to the PTI’s satisfaction.

On the other side, PTI leader Asad Umar urged his supporters – who believe in actual freedom – to join the long march as he directed [supporters] to start reaching Rawalpindi on – the evening – of November 25.

Asad Umar went on to talk about the assassination attempt on PTI chief Imran Khan, saying that efforts were made to assassinate the former premier [Imran] – through planning.

Taking at the coalition government, the PTI leader [Asad Umar] said that the economic situation continues to worsen, while no investment is being done as no one trusts the incumbent government.

Asad Umar emphasized the importance of holding elections, saying, "The one who does not go to the elections will be a "culprit" in my opinion."

Besides reviewing the Rawalpindi touchdown – constitutes of the long march – different matters were also taken into account, including the economic crisis.