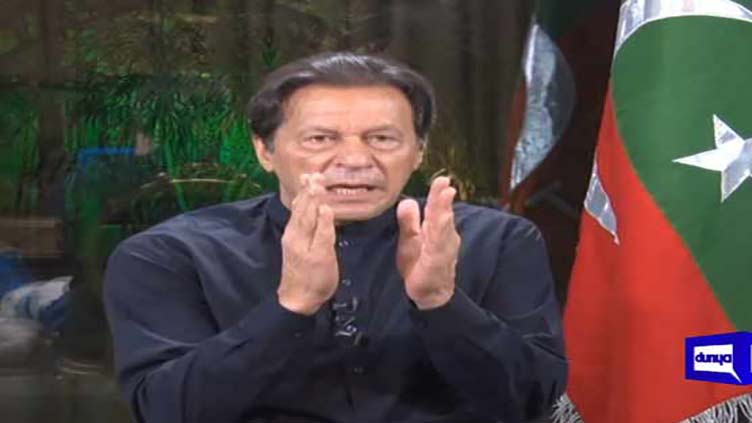 LAHORE (Dunya News) – Pakistan Tehreek-e-Insaf (PTI) Chairman and former prime minister Imran Khan on Sunday said that the dishonest decision-makers are consulting over the appointment of the Army Chief.

While addressing the participants of the long march through a video link, Imran strongly condemned the Istanbul blast [at the outset of his speech]. After which he shared his opinions over the final of the ICC T20 World Cup, the PTI chief said that despite the loss, Pakistan’s bowlers have been outstanding, terming Babar Azam a ‘World-class’ cricketer.

“In our regime, the opposition staged a long march on four occasions, but we never asked them to end their protest”. When the country was being developed, they toppled the government through a plot. The remittances in the PTI’s tenure were surging, but now decreasing”, said the former prime minister.

Taking a swipe at the PML-N and PPP’s bigwigs, Imran said, “For 30 years, these two families had the opportunities to deliver for the country. It has been said that our speed of moving the long march is ‘sluggish’. Efforts were made to assassinate me in Wazirabad.”

Reiterating that he has been saying for the last seven months that the incumbent government is taking the country towards a quagmire, Imran said, “The experiment made by them turned out to be failed. The one person is putting the country at stake for stashing his corruption. The incumbent government is not interested in holding elections because they have a fear of defeat against me. The rulers had never done a single work based on meritocracy. When the country was being developed, they toppled the government through a plot.”

Lashing out at PML-N supremo Nawaz Sharif, Imran said. “Convicted criminal is taking the decision of Pakistan while living in exile in London. The absconder is hesitant about elections. The children of Nawaz Sharif and Ishaq Dar are living abroad".

Berating Prime Minister Shehbaz Sharif, Imran said that he [Shehbaz Sharif] filed a defamation case against the Daily Mail after his corruption was highlighted. He added, "After facing defeat from the Daily Mail, Shehbaz had to face a fine of more than Rs10million".