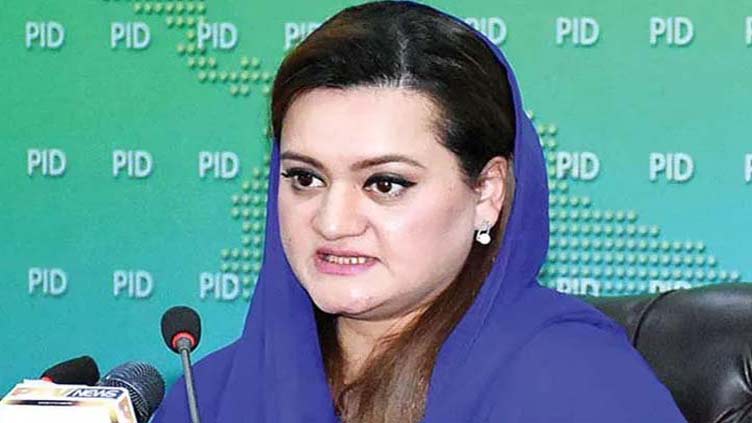 ISLAMABAD (Dunya News) - Minister for Information and Broadcasting Marriyum Aurangzeb on Wednesday said innocent people were losing lives due to the “bloody march” of Imran Khan, “who is bent upon creating chaos and anarchy to satisfy his ego in achieving ulterior motives”.

“The people are fully aware that Imran Khan is a thief, dacoit, liar, incompetent and foreign-funded Fitna,” she said in a news statement while reacting to Imran Khan’s addresses to the long march.

She said the “foreign funded Fitna” had admitted that he was in pain for not getting an opportunity to appoint the new army chief.

Marriyum said Imran Khan’s conspiracies would not work as it was Prime Minister Shehbaz Sharif who had legal and constitutional rights to appoint the new army chief.

The minister said Imran Khan had already admitted that he had offered a lifetime extension to the army chief for saving his government. The “mark of disgrace” was clearly visible on his (Imran) face, she added.

“Whether he whines, screams or bemoans, nothing will matter as it is Shehbaz Sharif who holds the government (in center),” she asserted.

She asked Imran Khan why he had failed to produce a single piece of evidence against PM Shehbaz Sharif in a court of law to prove the false cases filed by the Pakistan Tehreek-e-Insaf’s (PTI) government against the latter.

“If Rana Sana Ullah is a murderer then why did your government arrest him on the fake charges of carrying drugs,” she said, adding where were the proofs and videos that his government claimed to have against the interior minister.

She asked Imran Khan to stop hurling allegations at his opponents as it was too late and completely useless for him.

The minister said that the cases, which Imran’s former government claimed were filed on merit, failed to satisfy the court which gave clean chits to the then-opposition leaders, adding this proved that the cases filed were politically motivated.

In reference to the alleged video leak, three years ago, which purportedly depicted former NAB chairman Justice (Retd) Javed Iqbal and a woman by the name of Tayyaba Gul, which had then given the impression that the former government was trying to coerce the ex-NAB chairman to file cases against it adversaries, the minister asked that why Tayyba Gul was “abducted” if the cases against the PML-N leadership and others were on merit.

Marriyum said it was Imran Khan’s government which allowed Pakistan Muslim League-Nawaz (PML-N) supremo Nawaz Sharif to go abroad. “Now, it is too late (to speak of that),” she added.

The minister said that during his rule, Imran used hollow slogans of accountability against opponents but at the same time offered a lifetime extension to the army chief in a bid to save his skin and the government’s failures.