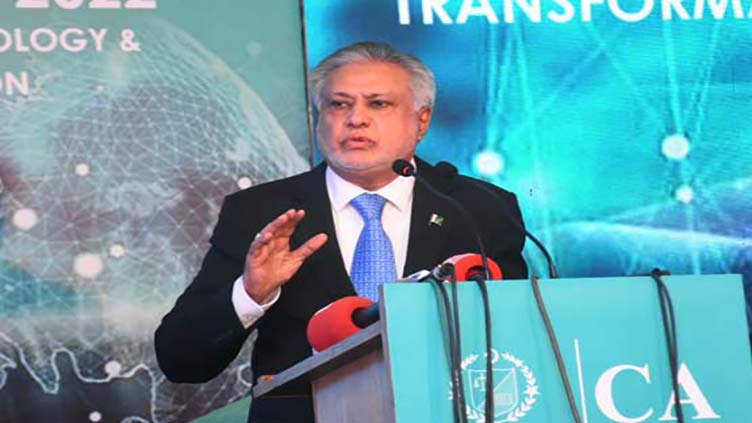 ISLAMABAD (Dunya News) – Finance Minister Ishaq Dar on Wednesday said that Pakistan will buy oil from Russia at a lower price than India.

Talking to the media, Ishaq Dar said that the country’s foreign exchange reserves will improve in the coming days. Taking a swipe at PTI Chairman Imran Khan, Dar said that he [Imran] makes irresponsible statements. He also advised the former prime minister [Imran Khan] to give up the politics of personal interests. The finance minister added that the news of Pakistan’s removal from FATF grey list will come in two days.

Earlier, while addressing the All Pakistan Chartered Accountant Conference, the minister said, “I want to convey a message to the markets. No need to panic, we are back in business and will sort everything out. There is nothing to worry about.”

He said that Pakistan will be fine and no one should have any problem because "Pakistan will not default". The country was facing serious challenges but the current government saved it from default even though it had to pay a heavy political price, added the finance minister.

Ishaq Dar said that Pakistan would need about $32 to $34 billion to meet its obligations and financial needs for the fiscal year 2022-23. "These include about $22 billion in multilateral debt and a current account deficit of about $12 billion," he added.

Dar, however, vowed that the government would work hard to fulfill the sovereign guarantees to protect the country’s dignity.

Similarly, he also dismissed speculations about extending bond maturity dates beyond December 2022. He said that Pakistan is a sovereign country so it should fulfill its responsibilities on time for its reputation and honor.

He urged chartered accountants to play their role and work for the betterment of the national economy by influencing the politicians.

Ishaq Dar said that Pakistan was facing deep challenges which were exacerbated by the devastating floods. However, he was confident that everything would turn out well as it did in 1998-99 and 2013, when the country faced similar challenges.

He said that the Pakistan Muslim League-Nawaz’s (PML-N’s) government had steered the economy on the path of development during its previous regime and it was predicted that it would become the 18th largest economy after Canada and Italy. This could not be done due to political interests.

Expressing regret, Dar said that if the political parties had worked together, the country would have achieved the target of becoming the 18th largest economy by 2026, but due to political instability, it has now fallen to the 54th position.

He said that he has always supported a ‘Charter of Economy’ which will help the economy to take the path of sustainable development.