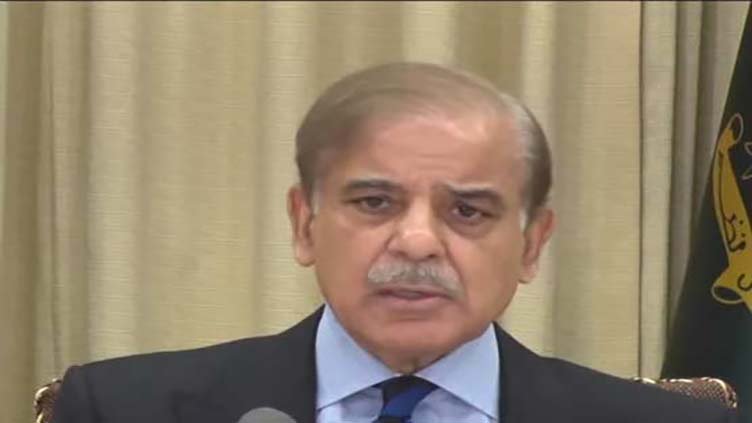 At a press conference flanked by SAPM Attaullah Tarar, Marriyum Aurangzeb, and Ahsan Iqbal, PM Shehbaz hit out at Pakistan Tehreek-e-Insaf (PTI) Chairman Imran Khan, saying that he [Imran] proved to be the biggest liar in the history of the country’s premiers and went on to say that the uproar of foreign plot was also caused by Imran merely. "In the NSC meeting, it was confirmed that there was no conspiracy with cypher," said PM Shehbaz.

The premier went on to discuss the event of the no-confidence motion, saying that former federal minister Fawad Chaudhry stated the conspiracy was hatched against the PTI-led government. "Twenty minutes later, the president had approved the summary of the dissolution of NA," he added. PM Shehbaz said that afterwards, former deputy speaker Qasim Suri read a written statement in which he rejected the no-confidence motion on the basis of the plot.

Expressing concerns over the audio leaks, PM Shehbaz posed a question, “Now who will be able to visit the Prime Minister’s Office to hold talks comfortably under such circumstances”. Lashing out at the PTI Chairman [Imran Khan], PM Shehbaz said that during floods, there was no need for politics, but a person like him [Imran] has left no stone unturned to keep on doing politics and not bothered about the flood-stricken people.

The PM said that the audio leaks had revealed Imran’s truth but also clarified that the government had nothing to do with them. PM Shehbaz said, “He [Imran] can be heard saying that this is a game. They can be heard saying that minutes of the meeting should be made according to their wish”. PM Shehbaz said the country’s honour was sabotaged in such a manner that no such example is found in history, adding that this is nothing less than treason. Imran played a "serious game with the country," claimed PM Shehbaz.

Clearing the air over the COAS appointment, PM Shehbaz said that the appointment of the next COAS will be done as per the Constitution. "It [the appointment] has a process in the law and Constitution and the decision will be taken according to that," added the premier.

Saying that the PTI Chairman [Imran Khan] inflicted irreparable damage on the nation, PM Shehbaz said that the PTI chief had committed "treason against the land of Pakistan, adding that the cabinet had also permitted an inquiry into it.

Talking about the courts, PM Shehbaz said, "As for the courts, the real question is if the courts are taking decisions based on justice. I think we should try to further make the courts independent. "No one will be allowed to take illegal action or the law into their hands," he added.

Informing about the situation of floods in the country, PM Shehbaz said that the government has spent almost Rs100billion on the relief and assistance of the flood-hit people. He said under BISP, the government has already spent Rs60billion and billions of rupees have been spent on the provision of blankets, tents, food packages and other items to the flood victims. The PM said China has provided $90million for the flood victims while other countries, including the US, Saudi Arabia, UAE, and Japan, have also come forward for the assistance of the flood-stricken people.

Furthermore, the premier said that federal and provincial governments, as well as other institutions, are strenuously working to extend relief to the flood victims. He regretted, however, that the PTI chief [Imran] is trying to create obstacles in the way of assistance pouring in from abroad.

Sharing his views over the PML-N Vice President’s acquittal in the Avenfield case, PM Shehbaz said that the Islamabad High Court has given a clean chit to Maryam Nawaz on merit, adding that Maryam Nawaz appeared before the courts for four years and also faced imprisonment with Nawaz Sharif.