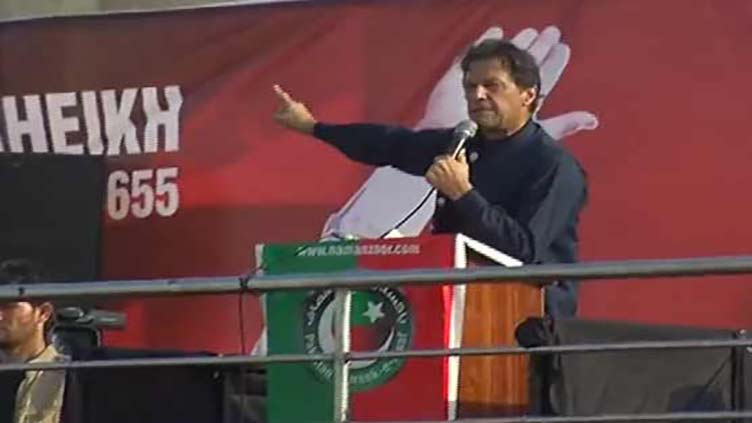 Addressing a public gathering, the PTI chairman took a jibe at the coalition government and went on to say that a group of looters has been imposed on the country through foreign conspiracy. "We cannot bow down to these looters", added the former prime minister. Lashing out at PML-N Vice President Maryam Nawaz, Imran said that she [Maryam] is doing illegal work and was importing machinery from India for her [Maryam s] son-in-law, he added.

He further said that on August 5, India canceled the decision of Kashmiris’ right to self-determination. Claiming that Bangladesh and India went ahead of the country under the current government, the PTI Chairman said that when the coalition government came to power, the country’s debts increased. While expressing his opinion on the judiciary, Imran said, “I also spent time in jail for the independence of the judiciary.”

Talking about the elections, the former prime minister said, “We will head towards the elections and will beat the ‘mafia’. Slamming the coalition government, the PTI Chairman said that if development was possible by begging, Pakistan could have developed. “Our Prime Minister is begging from other countries”, Imran hit out at Shehbaz Sharif.

While saying that "Haqeeqi Azaadi" movement has entered its final stage, the former prime minister [Imran] said that he is preparing himself to deal with Rana Sanaullah and Shehbaz Sharif.