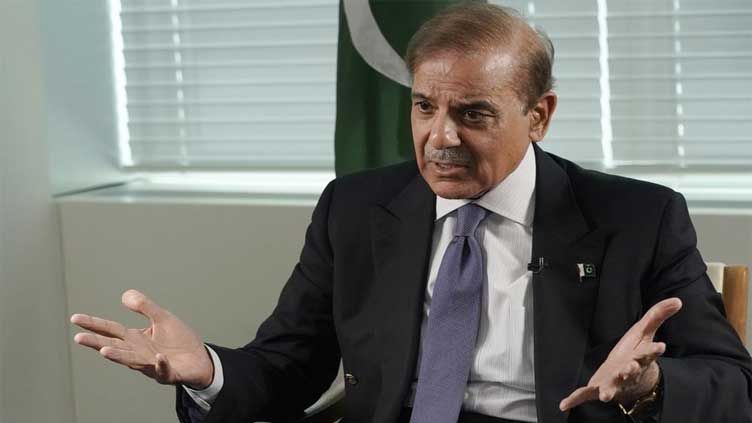 In an interview with "The Associated Press" (AP), PM Shehbaz said that he came to the United Nations to tell the world that "tomorrow, this tragedy can fall on some other country."

The prime minister urged the world leaders gathered for their annual meeting at the General Assembly to stand together and raise resources "to build resilient infrastructure, to build adaptation, so that our future generations are saved."

He said the initial estimate of losses to Pakistan’s economy as a result of the three-month flooding disaster was $30 billion, adding that he had requested UN Secretary-General Antonio Guterres to urgently hold a donors’ conference.

The prime minister further said that the impact of climate change on Pakistan was immense.

More than 1,600 people have died, including hundreds of children. Crops on 4 million acres have been washed away. Millions of houses have been damaged or completely destroyed, and life savings have disappeared in the devastating floods triggered by monsoon rains, AP quoted the prime minister as saying.

"Thousands of kilometres of roads have been smashed, washed away—railway bridges, railway track, communications, underpasses, transport. All this requires funds," the prime minister said, reiterating that they needed funds to provide livelihood to their people.

He said Pakistan was responsible for less than 1% of the carbon emissions that cause global warming. "We are victims of something we have nothing to do with," he added.

To a question, he said even before the floods began in mid-June, Pakistan was facing serious challenges from grain shortages and skyrocketing crude oil prices, sparked mainly by Russian-Ukraine conflict.

The skyrocketing prices had put the import of oil beyond their capacity and, with the damage and destruction from the massive flooding — solutions had become "extremely difficult,’ he added.

The prime minister said Pakistan already had a very robust, transparent mechanism in place to ensure that all aid items were delivered to people in need. In addition, he said, "I will ensure a third-party audit of every penny through international well-reputed companies."

He further informed us that he met top officials from the International Monetary Fund and World Bank and appealed for a moratorium on loan repayments and deferment of other conditions until the flood situation improves.

He stated that a delay "can spell huge consequences" for both the economy and the people of Pakistan.

He said that Pakistan might have to import about a million tons of wheat because of the destruction of farmland. The country also needed fertiliser because factories involved in their production were closed, he added.

About ties with India, the prime minister reiterated that India has to understand that unless and until the burning issue of Kashmir is resolved through peaceful talks … ‘we will not be able to live in peace.’

About Afghanistan, the prime minister said the Taliban had "a golden opportunity to ensure peace and progress" for the Afghan people by adhering to the Doha Agreement.
He also stressed that Afghan assets should be unfrozen.

The prime minister also highlighted that Pakistan desired "good, warm relations" with the US.

"What the previous government did, in this behalf , was most uncalled for, was detrimental to Pakistan’s sovereign interests," he said, adding it was definitely not in line with what ordinary Pakistanis would believe and expect.