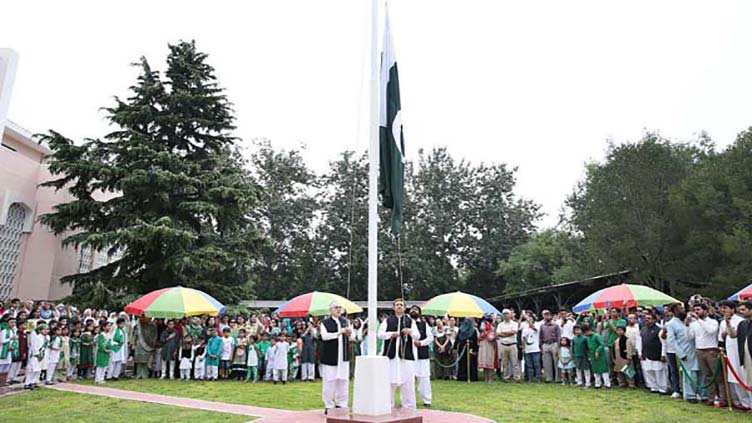 The event began with the recitation from the Holy Quran, followed by Pakistan Ambassador to China, Moin ul Haque raising of the national flag. On this occasion messages by the President and Prime Minister of Pakistan were also read out.

Prime Minister Muhammad Shahbaz Sharif in his message said that the 75th independence anniversary was a watershed moment praising the unflinching resolve and single minded devotion of Quaid-e-Azam that led to the creation of Pakistan.
Prime Minister also expressed his resolve to fully realize the dreams of socio-economic justice, rule of law and formation of an egalitarian society. The Prime Minister stated that Pakistan’s greatest strength were its people and he had full faith in them.

Addressing the event Ambassador Moin ul Haque congratulated the Pakistani community on the 75th Independence Anniversary of Pakistan.
He complimented the leaders of Pakistan movement and their struggle and sacrifices. He stated that it was now the collective duty of all Pakistanis to fulfill the vision of the founding fathers to make Pakistan a peaceful and strong country.

He also spoke about the special relations between Pakistan and China which have stood the test of times in the past seven decades.
He expressed the resolve of the two countries to take this unique friendship to higher levels in future. He also expressed solidarity with the people of Indian Illegally Occupied Jammu and Kashmir and underscored Pakistan’s unflinching commitment to the Kashmiri cause.

National songs were performed by the children of Pakistan Embassy College Beijing. Besides officials of the Embassy and their families, a large number of people including members of Pakistan Community, Chinese friends and media along with their families also participated in the event.