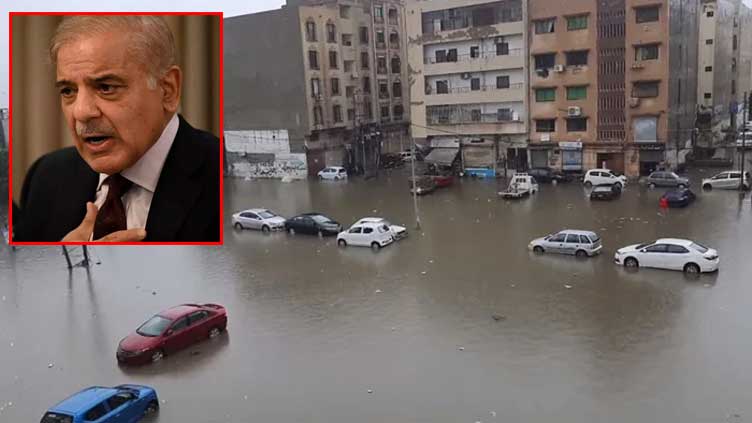 In a statement, the Prime Minister said every effort should be made to protect the people and prevent losses as much as possible. He directed NDMA to work with provincial governments and PDMAs for this purpose.

Shehbaz Sharif asked the authorities to immediately shift the stranded people to safer places. He also directed to provide temporary shelter and food to the affected people. He directed that medical teams should be mobilized for emergency medical aid and take measures for timely prevention of epidemic in the rain-hit areas.

The Prime Minister also expressed grief over loss of lives in Karachi and other parts of the country due to the rain.

He directed the NDMA to assist the provincial government to protect and rescue the affected people in Sindh.

The Prime Minister assured that the government will use all resources for the protection and assistance of the people.

Meanwhile, Pakistan Army and Sindh Rangers have joined rescue activities in Karachi as heavy rain sinks most of the port city, ruining Eid-ul-Azha of the residents.

According to details, the Pakistan Meteorological Department (PMD) has forecast light to moderate showers in the city throughout the day as humidity reaches 90 percent.

Meanwhile, rescue officials said that three people died of electrocution while one side of a two-story building collapsed; however, rescue teams managed to save the people.

Several main roads and streets were completely flooded and Abdullah Shah Ghazi, KPT and Submarine underpasses were closed for the traffic.

Most areas of Defense and Clifton are inundated with almost waist-high water in some areas similar other areas are reporting a similar situation.

Highways leading out of the city were also inundated due to excessive rainfall. The Karachi - Hyderabad track of the highway was closed due to flooding.

Heavy rainfall has once again exposed the city’s drainage system and the Sindh government’s claims regarding its rain emergency plans.

The port city received high amounts of rainfall with PAF Base Masroor recording rainfall of 119.5mm. DHA Phase-II received 106mm of rain while 76mm was recorded in Quaidabad. 65 mm at PAF Base Faisal, 56mm in Orangi Town, 49mm at Old Terminal, 46mm in Gulshan-e-Hadeed and 29mm at Jinnah Terminal.