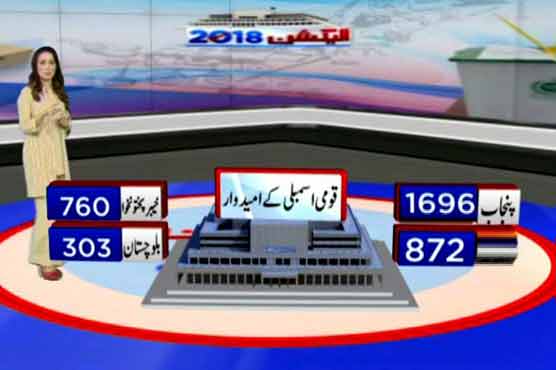 Among the candidates, many new faces will test their fortunes in the elections.

LAHORE (Dunya News) - Over 12,570 candidates are vying for seats in the National Assembly and provincial assemblies.

Against the National Assembly seats, as many as 3,675 candidates are in the electoral race whereas 8,895 for the provincial legislatures.

At least 1,696 candidates are contesting for the National Assembly from Punjab whereas 4,242 are vying for the provincial assembly seats.

From Sindh, 872 are contesting for the National Assembly seats and 2,382 for the provincial assembly.

In Islamabad, seventy six candidates are in the race for three seats of National Assembly.

Among the candidates, many new faces will test their fortunes in the elections. One such newcomer is Bilawal Bhutto, scion of the Bhutto family, who is contesting from Larkana’s NA-200 and Karachi’s NA-246 constituencies.

Many personalities belonging to the entertainment industry are also contesting election. One such is acclaimed singer Abrarul Haq, who is contesting on PTI ticket from NA-78 (Narowal) against PML-N leader and former interior minister Ahsan Iqbal.

Singer-turned-politician Jawad Ahmed has his eyes set on the office of the prime minister as he competes against political heavyweights Imran Khan (NA-131), Shehbaz Sharif (NA-132) in Lahore and Bilawal Bhutto (NA-246) in Karchi.