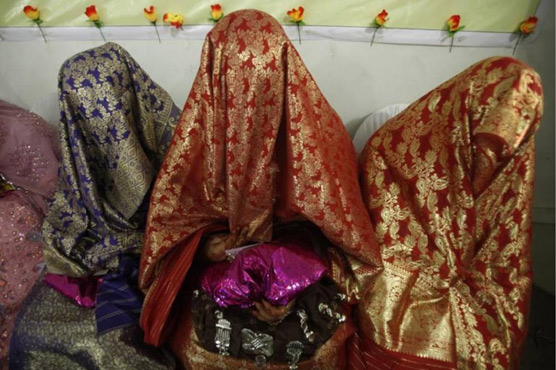 Polygamy is not widespread in Pakistan. The Institute of Policy Studies found it was most common in

(Thomson Reuters Foundation) - A Pakistan court on Wednesday ruled against a man who had remarried without his first wife’s permission in a landmark verdict that was applauded by women’s right activists.

Judicial magistrate Ali Jawwad Naqvi announced the verdict in a Lahore lower court, ordering the man to serve a six-month jail term and pay a fine of 200,000 Pakistani rupee ($1,902.95).

It was the first time a court in Pakistan had sided with the woman under a 2015 family law, and followed a petition by Ayesha Bibi, who said her husband, Shahzad Saqib, had wed for a second time without her approval.

"To get married without your first wife’s permission is breaking the law," she had argued in her appeal.

The court rejected the man’s argument that he did not need her permission because his religion allowed him four marriages.

The Council of Islamic Ideology (CII), a body that advises the government on the compatibility of laws with Islam, has often criticised the demand for a wife’s written approval if her husband wants to remarry. But the CII’s recommendations are not legally binding.

"It is encouraging that a wronged woman has used this law to complain to the court. The decision augurs well for women’s empowerment," Romana Bashir, who heads a non-governmental organisation, Peace and Development Foundation, told the Thomson Reuters Foundation.

Fauzia Viqar, chair of the Punjab Commission on the Status of Women, a body promoting women’s rights, welcomed the verdict as a way to strengthen women’s hand in a conservative society.

"The decision sets an important precedent. It will discourage polygamy and encourage women to take up their case with the courts. It will create awareness among people, in general, and women, in particular. Wronged women using this law will lead to their empowerment," said Viqar.

Polygamy is not widespread in Pakistan.

No statistics are available, but the Institute of Policy Studies, an Islamabad-based non-profit research organisation, found it was most common in rural areas in families without a male heir or in cases when men fell in love with another woman.

It rarely occurs in cities, the group found.

The husband has the right to challenge his conviction in the Lahore case, though it was not clear if he would do so.