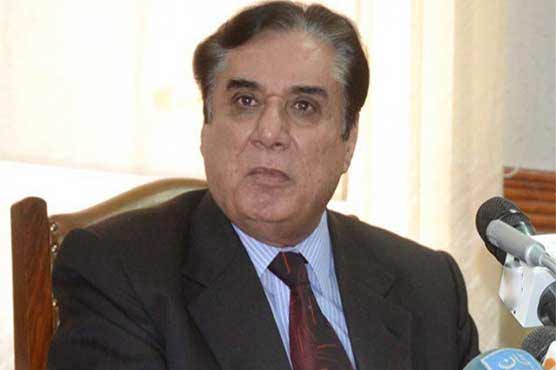 Justice (r) Javed Iqbal affirmed to wind up all big cases and to not delay any proceedings.

LAHORE (Dunya News) – Newly appointed chairman of the National Accountability Bureau (NAB) Justice (r) Javed Iqbal has Wednesday assumed charge of his post and said he will ensure merit in all cases by monitoring them himself.

Justice (r) Javed Iqbal held an informal talk with media outside the Parliament House when he reached there to appear before Senate Standing Committee on Human Rights, and hoped that all the matters will be smoothly done. He affirmed to wind up all big cases and to not delay any proceedings.

Former justice said all cases will be concluded by following the legal requirements like the inquiry of Abbottabad Commission. He also let it be known that changes will be seen soon. It is not new for me to face challenges, he commented.

NAB chairman further added that he will continue to head Missing Persons Commission as its final report is in last phase, and will leave the commission after the completion of report.

Earlier on Sunday, Opposition Leader in the National Assembly Syed Khurshid Shah revealed that Justice (r) Javed Iqbal had been finalized for the post of chairman of the National Accountability Bureau.

Shah especially lauded Abbottabad Commission report prepared under the supervision of Iqbal. He said that the names proposed by some of the political parties lacked merit.

On the other hand, Pakistan Tehreek-e-Insaf (PTI) Chairman Imran Khan had expressed reservations on appointment of Justice (r) Javed Iqbal, saying his party was not consulted in the process.

Justice (r) Javed Iqbal was born in Quetta in 1936. He obtained an LLB degree from Punjab University in 1968. He went to Australia then and did his LLM in International Law in 1971. In 1985, he obtained a degree of Masters in Islamic law from Islamic University Islamabad.

It is pertinent to mention here that he had refused to take oath under PCO in 2007. He also headed the Abbotabad Commission in 2011 and presented the report to the then Prime Minister Raja Pervaiz Ashraf on January 4, 2013.