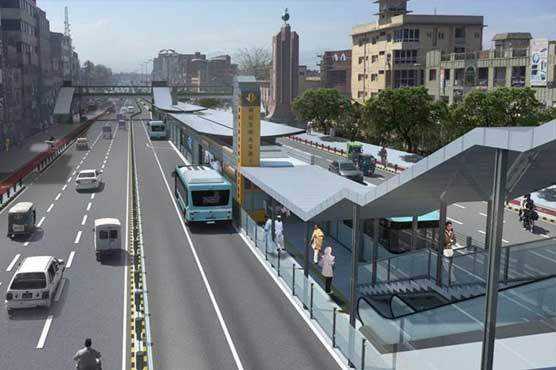 The project will help develop a sustainable urban transport system in Peshawar.

Under the agreements signed, ADB will provide loans of US$ 335 million for the Peshawar Bus Rapid Transit Corridor Project and US$ 100 million for Supporting Public-Private Partnership Investments in Sindh Province. A grant agreement was also signed with ADB for Supporting Public-Private Partnership Investments in Sindh Project for which Department for International Development (DFID), UK will provide US$ 19.23 million. The loan agreements were signed by Mr. Shahid Mahmood, Secretary, Economic Affairs Division (EAD) and Ms. Xiaohong Yang, Country Director, ADB, while the project agreements were signed by representatives of Government of Khyber Pakhtunkhwa and Government of Sindh, with ADB. Senior officials of Ministry of Finance, EAD, ADB and DFID were present during the ceremony.

Welcoming signing of the agreements, the Finance Minister thanked the ADB and DFID for providing vital support to Pakistan, particularly for the road and energy sectors. He reaffirmed the commitment of the government to further improve the physical infrastructure of the country, including by leveraging private capital to augment infrastructure investments. He expressed the hope that the people of Khyber Pakhtunkhwa and Sindh would benefit greatly from these projects envisaged under the signed agreements. He said that the Peshawar Bus Rapid Transit Corridor Project entails construction of a 26-kilometer corridor and associated facilities, which will benefit 500,000 people. He also stated that Supporting Public-Private Partnership Investments in Sindh Province Project will help in developing policies of the Government of Sindh for sustainable infrastructure provision through Public-Private Partnerships.

Country Director, ADB, assured Government of Pakistan of ADB’s support, and appreciated the government’s efforts to improve the economy and boost development in Pakistan. She said that the Peshawar Bus Rapid Transit Corridor Project will provide safer, more efficient, and comfortable transportation options for the people in Peshawar. She highlighted that the Supporting Public-Private Partnership Investments in Sindh Province Project will help to mobilize more financial resources from private sector, create jobs and generate income which will further improve the overall economic growth.

Peshawar Bus Rapid Transit Corridor Project will help develop a sustainable urban transport system in Peshawar by delivering the city’s first integrated Bus Rapid Transit corridor. In addition to the construction of a 26-kilometer Bus Rapid Transit corridor, the project also entails construction of associated facilities such as sidewalks, on-street parking, high-capacity drainage system along the corridor, improvement of access roads, energy-efficient streetlights and intelligent transport systems for traffic management. The project impact will be sustainable, low carbon and climate resilient urban transport system in Peshawar. The project will also make Peshawar more liveable and safe, boost private sector investment, and foster gender equity. Supporting Public-Private Partnership Investments in Sindh Province will strengthen the capacity of Finance, Planning & Development and other line departments. The expected impact of the project is aligned with the number of infrastructure investments and services in Sindh.