Located at the heart of the capital city of Lahore, the Istanbul Chowk (Istanbul Square) has added vibrant colours to the already rich architecture of the country's cultural hub in recent years. Photo: Flickr/Kaleem Ullah

(APP) - Located at the heart of the capital city of Lahore, the Istanbul Chowk (Istanbul Square) has added vibrant colours to the already rich architecture of the country’s cultural hub in recent years.

Inaugurated in November 2015 by Chief Minister Shehbaz Sharif and Turkish Ambassador to Pakistan Sadik Babur Gurkin, the newly beautified square was established to celebrate deep and ever-lasting friendship between Pakistan and Turkey.

The new structure was designed by a group of Pakistani architects from the Lahore College of Arts at Punjab University, and Lahore’s University of Engineering.

In accordance with old tradition, the architectural design of the square includes a tall pole which holds hundreds of bird houses, erected in the middle of Istanbul Chowk. Thousands of birds, mostly pigeons, fly around the square every day and are fed by local residents.

“Before this [structure] was built, a model boat was placed here and even we, as locals, didn’t know the name of this place,” Mohammad Asif, a local resident who now frequently visits the site to feed pigeons, told Anadolu Agency (AA).

“Istanbul is not a new name to us. We have been familiar with this city since our childhoods. We read about Atatürk and Istanbul in our course books,” Asif recalled, adding: “Now, we know Turkey for its courageous leadership, which raises the voice of Muslim Ummah.” 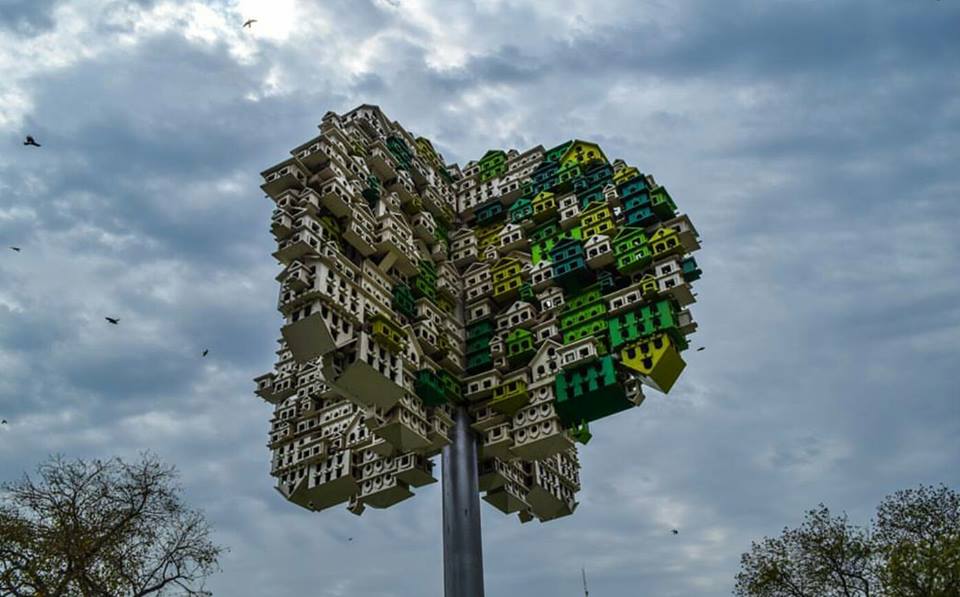 Several Turkish governmental institutions and private agencies have been assisting Pakistan, mainly in Punjab, in the health, education, energy and transportation sectors.

“This [Istanbul Chowk] is not only a symbol of Pak-Turkish friendship but also a beautiful addition to Lahore’s already rich culture and architecture,” Lahore Mayor Mubasshir Javed told AA.

“Istanbul is not only one of the beautiful cities in the world but also Lahore’s sister city. That’s why we chose to name the center of the city after Istanbul,” he added.

Lahore and Istanbul were declared sister cities in 1975. Istanbul Chowk is not the only structure of Turkish identity in Lahore. The city’s government has already named its two bridges after former President Abdullah Gül and a road was named after the mayor of Istanbul in Lahore.

Straddling the new and the originally “walled city” of Lahore, Istanbul Chowk connects two different cultures, unifying the city as one. To its north, located is the city’s main town hall, the headquarters of city government, the prestigious National College of Arts, the Punjab University Old Campus and the glitzy Mall Road.

To the south, the borders of the original city walls comprising of 12 gates (or entrances into old Lahore city) offer an entirely different atmosphere compared to the new or northern Lahore, peppered with towering skyscrapers, sprawling buildings, and glitzy neon-signs.

The narrow, stoned streets, mostly consisting of old styled wooden and brick houses with hanging balconies which are constructed a bit haphazardly, present a different look to outsiders.

Historical Nasir Bagh – Lahore’s hub known for political protests and gatherings – is barely 50 meters from Istanbul Chowk towards the east. The western side of the square leads to the massive building of the more than 100-year-old Lahore Government College, one of the most prestigious educational institutions in Pakistan.

“If you cross either side of Istanbul Chowk, you will explore the new colour of Lahore,” local hookah seller at Bhaati Gate Mohammad Saeed told AA.