'He is first martyr of our struggle': Nawaz on child's death in rally 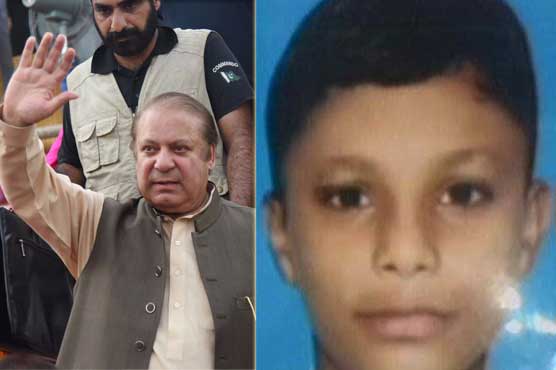 Nawaz Sharif announced that he will visit Hamid's house soon.

GUJRANWALA (Dunya News / AFP) – Expressing deep grief over death of 12-year-old Hamid Chughtai who was killed by a car during the ruling PML-N’s rally near Lalamusa, former prime minister Nawaz Sharif termed him the ‘first martyr of party’s struggle’.

Addressing the charged crowd in Gujranwala, Nawaz Sharif announced that he will visit Hamid’s house soon and extend every possible assistance to his family for life.

The ex-PM has been rallying crowds since Wednesday as he makes his way down the major road from capital Islamabad to his party’s stronghold in the eastern city of Lahore, weeks after he was deposed by the Supreme Court.

On Friday, Railways minister Khawaja Saad Rafique called the teenager "the first martyr of this movement for democracy" in an address to the thousands-strong crowd in nearby Gujrat.

One of the vehicles in the motorcade hit and killed the boy as he crossed a divider on the road, the minister said.

As at previous stops along the route, Sharif railed against the court’s decision, insisting his conscience was "clean" against allegations of corruption.

Supporters chanted "prime minister Nawaz Sharif" and danced to songs praising his party as the former leader addressed the crowd from a makeshift stage behind bulletproof glass.

Thousands had turned out to catch a glimpse of Sharif as his convoy rolled down the Grand Trunk Road, a more than 2,000-year-old trade route which leads from Chittagong in Bangladesh across India and Pakistan to the Afghan capital Kabul.

Sharif hopes to bring tens of thousands more into the streets in Lahore but it is not yet known when he will arrive in the Punjabi capital.