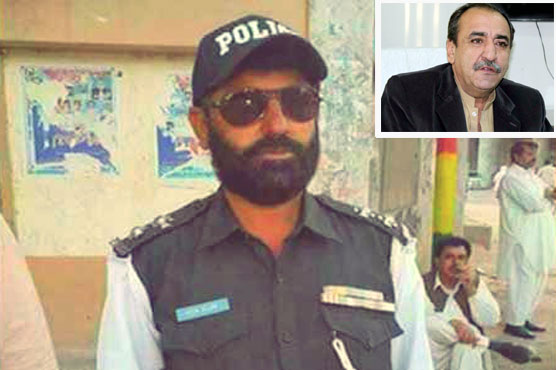 Attaullah's son says that their thumbprints were taken on an empty stamp paper forcibly.

QUETTA (Dunya News) – The family of slain traffic police constable Attaullah who died after being hit by Member of Provincial Assembly (MPA) Majeed Achakzai in Quetta has refuted claims of entering into an agreement with the MPA.

Attaullah’s son Moazzam has revealed that they have not made their peace with the MPA. He insists that his family will not pardon Achakzai for the murder of the police constable.

Moazzam says that their thumbprints were taken on an empty stamp paper forcibly.

Attaullah’s family sources have disclosed that Dera Ghazi Khan’s political personalities are being used for the conciliation whereas the forced signatures on the agreement were taken on June 25.

The deputy commissioner went to the slain constable’s residence on June 24 and gave Rs2 lac Eidi to the family. However; on media query Tareen adopted stance that he went to Attaullah’s house to offer fateha and express condolences.

Dunya News has obtained a copy of the agreement according to which the family will be liable to cooperate in the case against Achakzai if slain Attaullah is honoured and acknowledged by the government as a martyr, his son is recruited as a government employee and the family is given pension until completion of 60 years from the time late Attaullah was commissioned.

Balochistan government remained silent before the issue was raised by the media however; after that the influential MPA was put behind bars just to comply a formality.

The footage of the accident clearly shows that the vehicle which hit the traffic police constable was being driven by Achakzai himself.