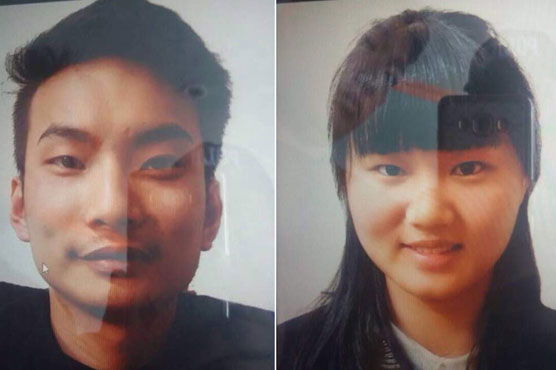 Wan Su came to Pakistan on a business visa but while in Pakistan he opened an Urdu academy.

(Web Desk) - The Interior Ministry has cancelled the visa of the owner of the Urdu academy where the chinese couple that was kidnapped last month worked. The owner of the academy is a Korean man named Wan Su alias Gilbert.

According to a souce privy to the development, Wan Su came to Pakistan on a business visa but while in Pakistan he opened an Urdu academy and was involved in illegal activities.

Security and intelligence agencies are currently involved in analysing the photos circulating on social media of the Chinese couple so that they can reach a final conclusion regarding the incident. Agencies are also trying to gauge whether the Chinese couple have actually been killed or not.

On 25th may, the Chinese couple - Lee Zing Yang, 24, and Meng Li Si, 26 - were kidnapped from Jinnah Town area of Balochistan s capital, Quetta. According to witnesses, the abductors had forced the couple at gunpoint into a vehicle and sped away.

A Balochistan government spokesman Anwarul Haq Kakar had said that the men pretending to be police officers had kidnapped the two Chinese individuals and in the process had opened fire and injured a passerby.

On 8th June, the Islamic State claimed that they had killed the Chinese couple that had been kidnapped. The claim, by the ISIS news agency Amaq, came hours after Pakistani military had announced it had carried a successful operation against ISIS-affiliated militants in the same region.

After the operation, a security official had informed the newspaper Guardian, that the Chinese couple might have been held in Mastung, the town targeted in the aforementioned military operation. He had added that agents had found a vehicle they suspected was used in the kidnapping but were unable to locate the couple.

Later on 12th June, Interior Minister Chaudhry Nisar Ali Khan said that the kidnapped Chinese couple who had been allegedly killed belonged to a group of people who had obtained a business visa but were involved in preaching.

According to a report in NYTimes, the Interior Minister also suggested that they were carrying out their  missionary  activities in an area where militants were active. This, although not directly stated, implies that the couples preaching led to their kidnapping by the militants.

The alleged killing comes against the backdrop of massive Chinese investment in the province under the multibillion dollar China-Pakistan Economic Corridor.

Security of Chinese workers is a national duty: Ahsan Iqbal