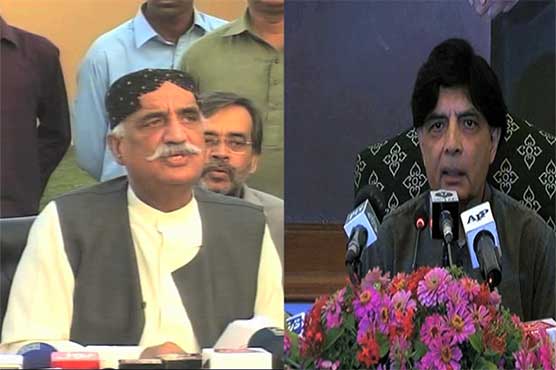 "Certain people can not come of their perceived reality and mentality"

ISLAMABAD (Dunya News) – Spokesperson for the Ministry of Interior has said on Sunday that Leader of the Opposition in National Assembly, Khurshid Shah has not managed to grow out of the era when he was employed by KSEC.

In reaction to Shah’s statement against Chaudhry Nisar Ali Khan, Minister of the Interior, the spokesperson said today that associating every matter with the federal minister symbolises ‘political bankruptcy’.

He said that certain people can not come of their perceived reality and mentality. It seems, he said, as if Shah still thinks the way he used to in 1970s at the time when he worked for Karachi Electric Supply Company.

The spokesperson for the ministry said that the federal minister does not think of Shah’s statement dignified enough to consider and respond to. He rhetorically asked why certain section of the media takes notice of such baseless and misleading statements.

Panama case decision can either strengthen or weaken the country: Khursheed Shah

Indian spy got what he deserved: Khursheed Shah