Foolproof security arrangements being made ahead of Panama case verdict 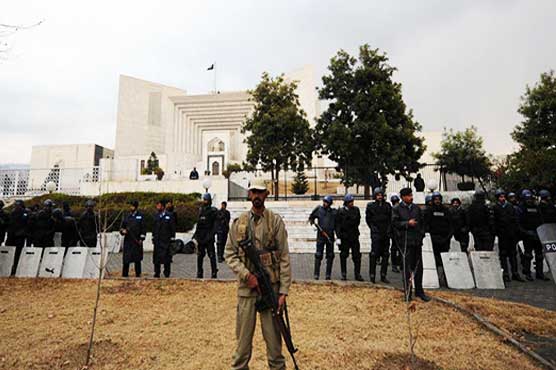 More than 500 policemen would perform duties inside the court.

ISLAMABAD (Dunya News) – The authorities are ensuring strict security arrangements inside and outside the Supreme Court (SC) ahead of Panama Leaks’ verdict that is due to be announced on Thursday at 2pm.

More than 500 policemen would perform duties inside the court whereas additional force will also be deployed outside. Six to eight officers will accompany every political party leader.

Sources said that 15 special passes would be issued to each party in the case while measurements have been taken to bar the political activists to enter Red Zone area. Stern action has also been directed against those raising slogans in the premises of the court.

Keeping in view the whole scenerio, Inspector General of Islamabad police has summoned an important meeting to inspect the arrangements in the light of guidelines from SC registrar.

Panama Papers had published a leak of documents belonging to Mossack Fonseca, a Panama-based law firm on April 4, 2016. The leak named over 400 incumbent as well as former leaders of the world who owned offshore companies which were interpreted by the commentators as means to stash wealth abroad.

Prime Minister Nawaz Sharif’s family; two sons and a daughter were named in the documents which were studied by International Consortium of Investigative Journalists.

Leader of one of the opposition parties, Imran Khan used the leak to accuse the government of Pakistan Muslim League-Nawaz of misleading the nation and looting hard-earned money of the taxpayers and managed to draw a consensus of opposition parties to demand the premier to resign and offer himself for accountability.

Prime Minister offered to establish a parliamentary committee to form joint Terms of References. The apex court took up the case on October 20 when Imran Khan warned the government of alleged lockdown of the federal capital last year and condensed the petitions filed by PTI, JI and AML against the premier.

On November 7, family of the premier filed replies in the top court and on November 14, PTI submitted evidence against the Sharif family.

On January 10, in its remarks, the court had branded disqualification of the premier over mere assumptions a dangerous precedent.

Justice Ijaz had stated in another hearing on January 12 that the records which the PM had asserted to produce before the court were not filed and that the bench could not decide what was true and what was false without looking at the documents.

State institutions were remarked against by the top court on February 21 when the judges declared the authorities concerned to have failed in probing lawmakers who owned shell companies.

After a trial that ran for around four months, Supreme Court reserved the verdict on February 23. A supplementary cause list of the top court issued on April 18 reported that the verdict would be let out on April 20.

Will accept any decision by court, reaffirms Maryam Aurangzeb

April 20 will be a memorable day for Pakistan: PTI