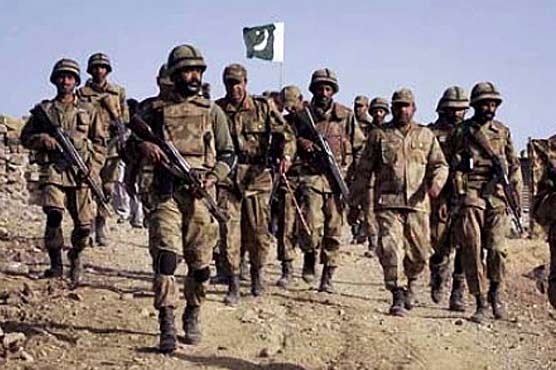 ISLAMABAD (Wajahat S. Khan) - A senior Pakistan Army officer has confirmed that at least six different "terrorist camps" on the Afghan side of the Af-Pak border were targeted and destroyed yesterday and overnight by Pakistani artillery.

According to the source, all the camps were located within 100 to 200 meters across the border, on the Afghan side, and most of them were affiliated with or belonged to the Tahreek-e-Taliban Pakistan Jamaat-ul-Ahraar (TTP-JA), an ISIS-loyalist Pakistani Taliban splinter group that has claimed responsibility for most of the terror attacks in mainland Pakistan this past week.

"Six camps, all on the Khyber and Mohmand tribal agency axis, including the one in Lalpura belonging to Adil Bacha, the deputy commander of the Jamaat-ul-Ahraar, have been engaged, neutralized and dismantled overnight by our gunners," said the officer.

Dozens have been killed in terror attacks this past week in all four of Pakistan s provinces, including an attack on an 800-year old shrine in Sehwan Sharif on Thursday that killed over 80, and is being categorized as the biggest terror attack in the country since the Peshawar Army Public School (APS) massacre in 2014 that killed over 150.

Jamaat-ul-Ahaar elements claimed that attack too, and have been publishing videos and threats to strike Pakistan since then. The TTP-JA are believed to be headquartered in the eastern Afghan provinces of Kunar and Nangarhar, according to several military assessments and statements released since the Peshawar massacre, and have conducted various attacks on Pakistani territory since moving across the border from local bases after the launch of a massive counter-insurgency operation, Operation Zarb-e-Azab, by the Pakistanis in 2014-15.

Last night s actions followed the unprecedented closure of all major Af-Pak border crossings by Pakistan on Friday, as well as a meeting between Pakistani generals and Afghan officials - the military said a list of over 70 militants was handed to the Afghans to take immediate action against - and phone calls between Pakistan s senior-most diplomat, Sartaj Aziz, and the Afghan National Security Adviser, Hanif Atmar.

A Pakistan military officer explained that there was no reciprocity from the Afghan side within the intelligence framework where the two militaries are supposed to work together. "We give them lists, they give us lists," he said, regarding Friday s meeting at GHQ. "In turn, we ve even given them a top Haqqani commander recently. And what have we gotten back? Nothing."

About the Pakistani army s actions, the military source told me that "the terror camps in Afghanistan indicated a clear and present danger to Pakistan, and as nothing was being done about them by Afghan or western forces on that side of the border, we had to take the matter up ourselves."

However, no air assets were used in the strikes. A senior officer of the Pakistan Air Force told me on the basis of anononimity that "there are clear plans to strike terrorist targets in Afghanistan, but we don t have the green light yet."

Another Pakistan Air Force pilot, who is stationed in a fighter squadron in Jacobabad, said, on the basis of anonymity: "There s a lot of anger, and we are ready to go, have been training to go, but they won t let us go yet" in to Afghanistan.

However, several senior military officials made said that despite of the pressure from within the military as well as from the public and media, the Pakistani military will not use air power in Afghanistan as it could set a new and dangerous military precedent in South Asia.

For years, Pakistan and Afghanistan have traded barbs and blamed each other for not doing enough about the militant groups based on their own territory. Kabul says groups affiliated with the Afghan Taliban, like the Haqqani Network, use Pakistani soil and protection to strike in Afghanistan. Meanwhile, Islamabad claims that groups associated with the Pakistani Taliban, like Jamaat-ul-Ahraar, enjoy safe havens in Afghanistan and are funded by Afghan intelligence and its allies, like Indian and US intelligence services.

But in America and Pakistan s longest war, the involvement of a nuclear-armed Islamic republic s regular military operating on Afghan soil could be a signature of a new level of escalation.