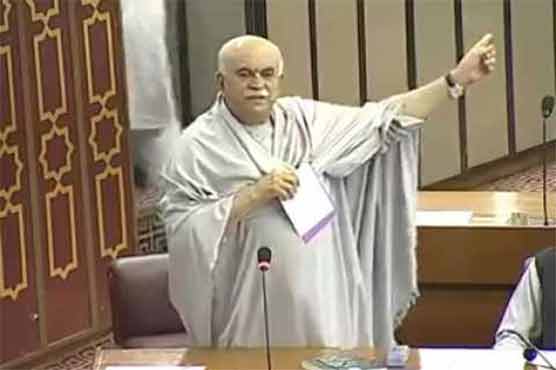 Ch Nisar would have also responded to Achakzai's remarks had he been allowed to speak: sources

Sources indicate that Achakzai wanted to speak upon matters related to national security and had brought with him a number of related documents for referencing as well. Achakzai requested Ayyaz Sadiq to let him speak but the Speaker wrote back “please no” on the paper chit he (Achakzai) forwarded to him with his request.

Minister of the Interior Chaudhary Nisar Ali Khan would have also responded to Achakzai’s statements had he been permitted to speak, sources say.

While conversing with the journalists after the session concluded, Achakzai stated that he came to the National Assembly after fully preparing his arguments. He added that “I did not say anything wrong about the security institutions in my previous speech as well.”

Achakzai said that the Speaker dismissed the session before the set time and postponed it till an undefinite period. Pakhtunkhwa Milli Awami Party leader headed to Speaker NA’s chamber after the session concluded.

Progress has been made in probe of Quetta incident: Nisar