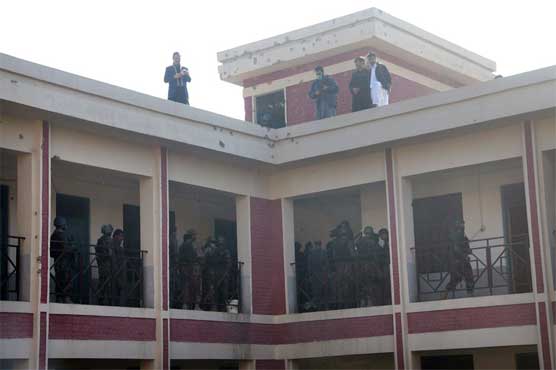 PESHAWAR (Dunya News) – Sources revealed on Wednesday evening that the Taliban commander involved in Charsadda university attack had been in contact with Indian embassy in Afghanistan. The connection was revealed when the calls of the commander got traced, reported Dunya News.

According to the sources, the whole plan of the attack on Bacha Khan University was cooked in Afghanistan with the help of India. It is also revealed that the attackers were provided with 30 lac Indian rupees from Indian embassy in Jalalabad Afghanistan to use for the preparations of the deadly attack.The commander, who conducted the attack, had been working as the right hand of the banned Tehreek-e-Taliban’s chief Mullah Fazalullah. The traced calls proved that the commander had been continuously in contact with the attackers through the phone numbers 0093774022167, 0093782552489 and 0093774262593. The commander was controlling the activities of the terrorists from Afghanistan.

Pakistani government has decided to raise the issue in front of Afghan government.

Regional police chief Saeed Wazir told AFP that the operation had ended and security forces were clearing the area, with most of the student victims shot dead at a hostel for boys on the Bacha Khan University campus.

Police, soldiers and special forces launched a ground and air operation at the university in a bid to shut down the assault. Dozens of personnel in combat fatigues and automatic weapons piled out of transport vehicles as helicopters buzzed overhead and ambulances with sirens wailing approached the scene.

There were male and female staff members and students inside the campus, said Fazal Raheem Marwat, vice chancellor at the Bacha Khan University, adding he had been on his way to work when he was informed of the attack.

"There was no announced threat but we had already beefed up security at the university."

Students spoke of one hero teacher -- named by media as Syed Hamid Hussain -- fighting back against the intruders, shooting his weapon in a bid to protect his charges.

Geology student Zahoor Ahmed said his chemistry lecturer had warned him not to leave the building after the first shots were fired.

"He was holding a pistol in his hand," he said.

"Then I saw a bullet hit him. I saw two militants were firing. I ran inside and then managed to flee by jumping over the back wall."

Another student told television reporters he was in class when he heard gunshots.

"One student jumped out of the classroom through the window. We never saw him get up."

He also described seeing the chemistry professor holding a pistol and firing at the attackers.

"Then we saw him fall down and as the terrorists entered the (registrar) office we ran away."

Talking to Dunya News, Deputy Commissioner Tahir Zafar Abbasi said that situation is under control now. Firing in the university premises has stopped.

Naik Mohammad, security chief at the university, said the attackers had entered close to a campus guest house.