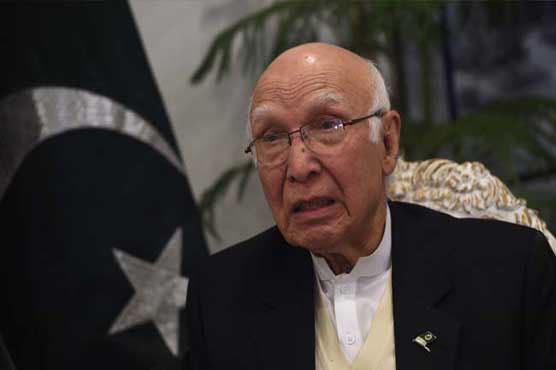 ISLAMABAD (Dunya News) - Adviser to Prime Minister on Foreign Affairs Sartaj Aziz has said on Friday that China-Pakistan Economic Corridor (CPEC) will ensure stability, progress and prosperity in the region besides linking Pakistan and China as well as other regional countries with one another.

He assured that Indo-Pak Foreign Secretary level talks will be held soon. The adviser confirmed that no meeting took place in Paris between the National advisers of both the countries.

While talking about Obama’s speech, he stated that US President’s predictions regarding security of the region are not accurate however; Pakistan is conducting decisive action against terrorism and is hopeful of further peace and stability.

Sartaj Aziz said that the government is trying to settle the differences between the provincial and federal government over CPEC. He affirmed that the threats related to the project will be eliminated.

He termed the project as a uniting force for all the country and said that it will help to minimize poverty.

Moreover, the adviser also pronounced that fool proof security has been arranged for the Chinese workers employed for the project.