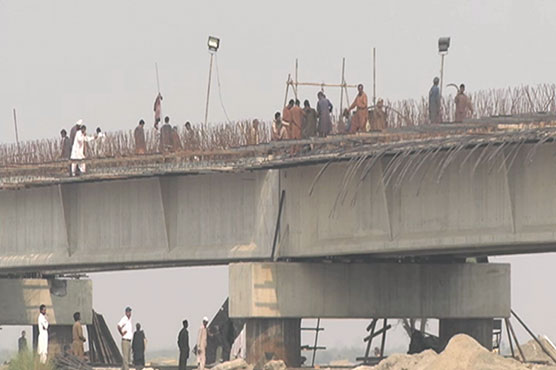 Future of several Arab-funded projects in Pakistan is at stake after ban on hunting.

ROJHAN (Web Desk) – Construction of Pakistan’s largest bridge over Indus River has slowed down after the authorities imposed ban on hunting of Houbara bustard in the region, Dunya News reported.

Future of several Arab-funded projects in Pakistan including construction of Khalifa Bridge over Indus River in tehsil Rojhan is at stake after ban on the hunting. The decision has triggered protests in backward areas of the country in support of allowing licensed hunting of the birds and of enduring relations between Pakistan and the UAE.

The 1325 meter long and 10.5 meter wide bridge can sustain every type of heavy traffic and it will also reduce travel distance between Indus Highway and National Highway by 40 kilometers.

Last month, a three-judge Supreme Court bench ordered the federal and provincial governments not to grant licences or permits to hunt the endangered bird in the future.

Wealthy hunting parties from the Gulf travel to Pakistan every winter to kill the houbara bustard using hunting falcons, a practise that has sparked controversy in recent years because of the bird’s dwindling numbers.

The issue has also cast a spotlight on traditionally close ties between Pakistan and its allies in the Arab world, particularly Saudi Arabia.

The houbara bustard appears on the International Union for Conservation of Nature’sRed List as vulnerable to extinction, with Pakistan’s population of 110,000 feared to be decreasing by 30 percent a year.

Think you're unhappy in Dubai? Police may call to ask why