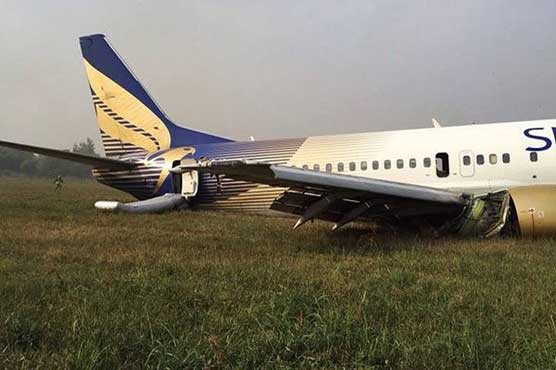 LAHORE (Dunya News) – Civil Aviation Authority sent a report to aviation advisor Shujaat Azeem on Tuesday which said that the accident of a private airline’s plane some days ago on Lahore airport had occurred due to pilot’s mistake. Report mentioned that the pilot could not maintain the balance of the aircraft and also ignored the advice of his co-pilot, reported Dunya News.

According to the details, the pilot named Asmat, landed the aircraft on left wheel instead of using both of the wheels that broke the assembly and all the burden shifted on right wheel. On the third jump the aircraft reached the grassy ground, leaving runway behind. Report said that the plane landed with such a bang that both of the tyres burst on topuching the runway.

The investigation also showed that the pilot ignored his co-pilot’s advice and despite high speed he landed the aircraft instead of slowing it down before the landing. Aviation Authority has requested for an inquiry report from the private airline on the condition of wheels and maintenance of aircraft and it should be also investigated if the engineers checking the aircrafts were efficient enough or not.

Report said that the aircraft can not be used again after this accident. It was also mentioned in the report that the pilot did not made the control tower aware of any problem on his end and it was a not an emergency landing. After the submission of this report, now the Safety Investigation Board will prepare the final report on the case.