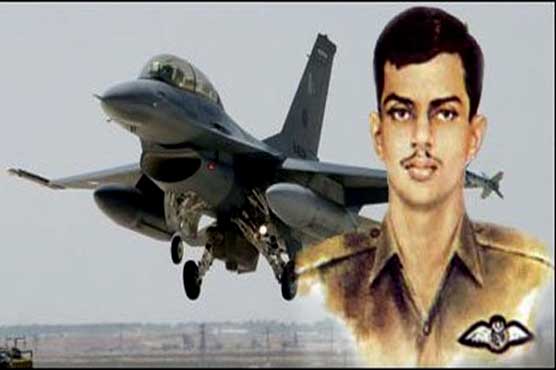 Rashid Minhas rose to the occasion when the duty called.

He remains the youngest officer to receive the Nishan-e-Haider award and is the only recipient of the highest honour of gallantry from Pakistan Air Force.

Born on 17th February 1951, this gallant son of soil got his early education from the city of lights, Karachi.

On reaching the age of 17, he joined Pakistan Airforce Academy in Risalpur as a Flying Cadet. He graduated from the academy and passed out as General Duty Pilot in 1971. He was posted to PAF base Masroor to hone his craft as a fighter pilot. He successfully completed his training in August 1971.

These were tense times in the history of the country and times of such magnitude require men of even greater substance. Needless to say Rashid Minhas rose to the occasion when the duty called.

On the fateful morning of 20th August, Rashid Minhas got into his aircraft and got clearance for take-off by Air traffic controller. He was readying his aircraft for take-off when his trainer, the traitor-to-be, Matiur Rehman, signalled the young officer’s T-33 Trainer Jet to halt.

This raised a red flag in the young officer’s mind who thought the act to be an irregularity as the protocol dictated otherwise.

But the 20 year old thought nothing of it as his ‘instructor’ climbed abroad his aircraft under the pretense of ‘observation’.

Rashid Minhas’ initial judgement proved right as the backseat member of his 2 crew trainer aircraft transmitted a message via radio to his comrades back in Karachi to take his family to the Indian High Commission and seek refuge there.

On learning the nefarious plot of the Judas clad in the uniform of his beloved country Rashid Minhas notified Maripur Control Tower of the incident.

The traitor, however, overpowered the officer by employing chloroform from behind in an literalc act of backstab and cowardice. The young officer lost consciousness soon as the effect of the drug took its toll.

The spirit of Rashid Minhas was far from broken. As his captive took control and changed the direction of the plane to Indian territory, the young lad fought mind over matter to regain consciousness and sent repeated messages on radio.

The enemy territory edged closely by the moment and even in the heat of the situation, Rashid Minhas knew that the aircraft could not be maneuvered back to the base.

It is said that God reserves the toughest battles for his best and such was the case when Rashid Minhas decided that he would rather see the aircraft burned to the ground than to be in the hands of the enemy.

As the crossing of the border remained 32 kilometers, Rashid Minhas turned his control yoke downwards to steer his plane to the ground. His plane crashed down in Thatta, Sindh.

Rashid Minhas showed interest in aviation and aircrafts from a young age. Little did anybody know that the young boy, whose family hailed from Jammu Kashmir would achieve a height of greatness beyond any elevation an aircraft could reach.

He was awarded the highest gallantry award, Nishan-e-Haider posthumously.