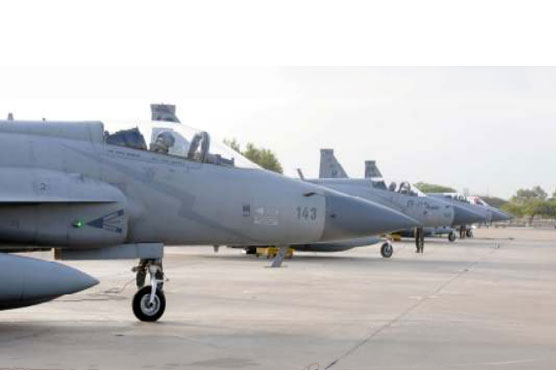 (Web Desk) - A three ship formation of JF-17 Thunders along with a PAF contingent comprising pilots and technicians departed from an Operational PAF Air Base, today (Monday), to participate in forthcoming Paris Air Show 2015.

The 51st Air Show organized by French Aerospace Industries Association will start on 15 June, 2015 at the Le Bourget Parc des Expositions and would continue till 21 June, 2015 .

The JF-17 Thunder is light weight multi-role aircraft which has been jointly co-developed by PAF & China Aero-technology Import Export Corporation (CATIC), and co-produced by Pakistan Aeronautical Complex (PAC) and CATIC.

The JF-17 aircraft is also poised to become the mainstay of PAF, as the PAF plans to replace its ageing fleet of fighter aircraft with JF-17s.