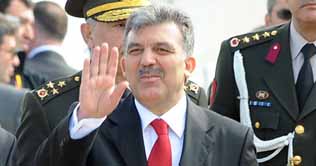 Turkish President Abdullah Gul arrived Tuesday on a four-day official visit on the invitation of President Asif Ali Zardari. The Turkish President was given a warm red carpet welcome at Pakistan Airforce base as he alighted from his plane. Interior Minister Rehman Malik and higher officials received the dignitary. Two children presented bouquets to the Turkish President and a smartly turned out contingent of armed forces gave him guard of honour as he inspected the parade. The Turkish President was accompanied by cabinet ministers, parliamentarians, senior officials and chief executives of leading Turkish companies from engineering, construction, energy, textile and manufacturing sectors. Abdullah Gul will hold bilateral talks with President Zardari and Prime Minister Syed Yusuf Raza Gilani. The two countries are likely to sign a number of bilateral agreements and MoUs during the visit to boost cooperation in different fields. At a special ceremony, President Zardari will confer Nishan-e-Pakistan on President Gul. He will also be awarded an honorary degree of doctorate in international relations by Quaid-e-Azam University, Islamabad. The Turkish President will also participate in a Chief Executive Officers forum to be held in the federal capital and attended by leading Pakistani businessmen. President Gul will also visit Lahore where Prime Minister Gilani will hold a civic reception in his honour.