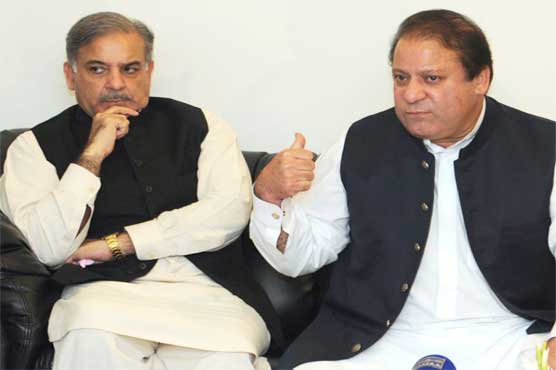 The maintenance of peace, law and order upon Qadri's arrival was also discussed.

LAHORE (Dunya News) – Prime Minister Nawaz Sharif and Chief Minister Punjab Shahbaz Sharif met on Sunday in Raiwind and discussed Model Town tragedy investigation and Pakistan Awami Tehreek (PAT) chief Dr Tahir-ul-Qadri’s arrival, Dunya News reported.
In the meeting, Prime Minister inquired about the ongoing investigation into the Model Town tragedy and evaluated the developments of the probe.
Nawaz Sharif said that the loss of human life in the tragedy is regrettable, adding that there will be no compromise to obtaining justice. He said that protecting people’s lives and properties is government’s responsibility.
The maintenance of peace, law and order upon Qadri’s arrival was also discussed.
Earlier, the Interior Ministry imposed Section 144 at Benazir International Airport and its surrounding area ahead of the Qadri’s arrival.
According to police sources, entry into the airport premises carrying banners and placards would not be allowed while those coming towards airport would be arrested.
The sources added that more than 6000 policemen would be deployed to stop the Awami Tehreek workers from going to airport.
According to police, all these measures were adopted due to security threats.
Earlier on Saturday, Federal Interior Minister Chaudhry Nisar Ali Khan imposed ban on holding any kind of rally or public gatherings in the federal capital, while ordering additional security on sensitive areas in the twin cities.
A high level meeting chaired by Nisar took place here in Islamabad where the security arrangements of Pakistan Awami Tehreek (PAT) chief Tahirul Qadri’s arrival were reviewed.
Interior Minister directed Commissioner Islamabad to impose a ban on holding any kind of rally or public gathering in Islamabad. He also directed the law enforcement to carry an intensive search operation of the twin cities Rawalpindi and Islamabad along with the adjacent areas and rid them of the militant elements on war-footing.