There is nothing for public welfare in demands of Imran: Rana Sanaullah 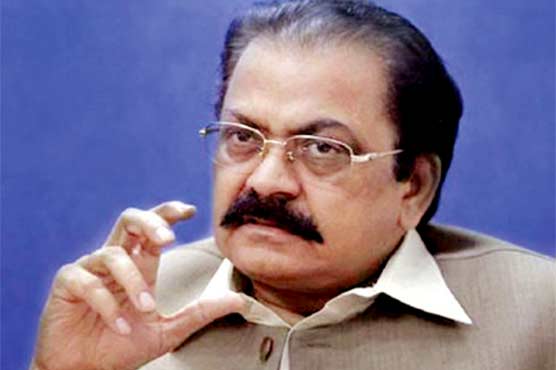 Punjab Law Minister says PTI has brought participants of the rally from other cities.

FAISALABAD (Dunya News) - Punjab Law Minister Rana Sanaullah has said that Pakistan Tehreek-e-Insaf (PTI) does not have any public agenda.

Addressing a press conference ahead of PTI rally in Faisalabad on Sunday, Rana Sanaullah said that Imran Khan spent millions of rupees for Faisalabad rally that was in no way public service. He said that foolproof security arrangements were made at Dhobi Ghat for the rally of PTI.

The provincial minister said that the PTI was bringing participants from other cities to show gathering.

Rana Sanullah said citizens of Faisalabad would see that there was nothing for public welfare in the demands of PTI chief Imran Khan. He said the people of Faisalabad have rejected the Tsunami of PTI.

Rana Sanaullah said the people of Faisalabad have rejected the Tsunami of Pakistan Tehreek-e-Insaf. He said Punjab Chief Minister Shahbaz Sharif has assured to invest two billion rupees for establishing a textile park and launching a two hundred and seventy megawatt power project in Faisalabad.

The minister said the project will also provide jobs to the youth of the area.

Rana Sanaullah said that the PML-N government was working day and night to end energy crisis.