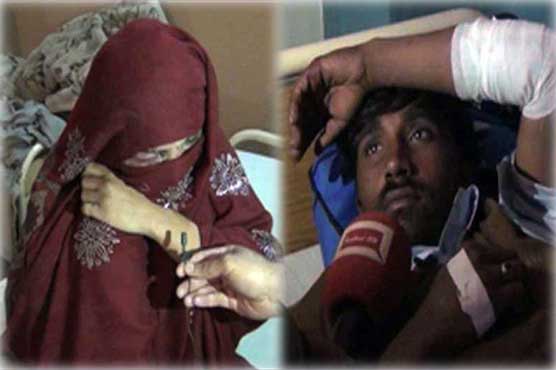 Police has registered the case and is now raiding various locations in search of the suspects.

SAHIWAL (Dunya News) – The woman who jumped off the train along with spouse after being chased by family members over love marriage three months ago was brutally murdered on Wednesday, Dunya News reported.
The resident of Harappa Farzana was taken from Darul Aman by relatives who butchered her with axe and then shot her dead multiple times.
Police has registered the case and is now raiding various locations in search of the suspects.
The slain woman had entered into love marriage after running away from family three months ago.
In the previous incident which also made headlines, the victim’s relatives had kept chasing her, following which she jumped off a train along with spouse and was critically injured.
Her husband had divorced her after the train jump incident and the court had sent divorcee to Darul Aman.
The couple had married on February 9 and vowed to stay together for better or worse. They had left for Karachi on a train in search for better life but man’s brother had tipped the relatives of the young woman about their plans.
Five armed relatives of Farzana boarded the train on Sahiwal station following which the couple had jumped off the train.