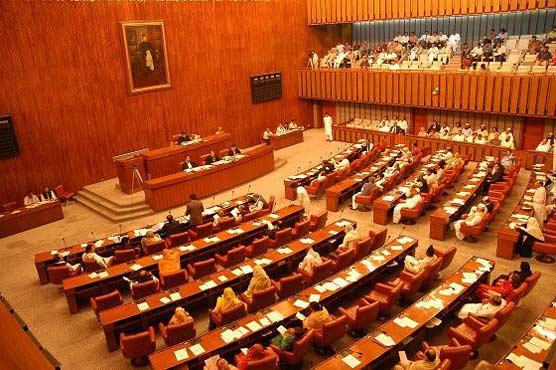 Senate Rule 61 bounds Prime Minister Nawaz Sharif to attend the session at least once a week.

ISLAMABAD (Web Desk) - The Senate on Monday passed a bill that Prime Minister Nawaz Sharif would have to appear in the upper house of parliament at least once a week when the Senate session is underway.

According to Senate Rule 61 (2A) Prime Minister Nawaz Sharif is bound to attend the session at least once a week.

Muttahida Qaumi Movement (MQM) Senator Tahir Mashhadi submitted a resolution in the senate secretariat that alleged the Premier was not giving importance to the upper house and has not attended a single session since taking oath of office in June last year.

The rules of the house should be amended to make it mandatory for the PM to attend the senate session, said Mashhadi.

Earlier opposition parties had protested and staged a walk out on the point that the Prime minister has not attended a single upper house session since taking oath of office.

The Senate also passed a Resolution unanimously demanding the government to prepare and make public a workable plan for FATA.

The resolution was moved by Afrasiab Khattak and Farhatullah Babar.

Speaking on the resolution, Minister for States and Frontier Regions Abdul Qadir Baloch said the government is committed to bring peace in the country without bloodshed. He said all possible measures are being taken in this regard.

He said the government has started dialogue with Taliban with a view to bring peace and this process will not be dragged for long period.

The Minister said that about six thousand people have been martyred due to militancy in FATA and about same number injured in the area. He said rupees four billion have been paid to the victims of terrorism as compensation and rupees two billion more will be paid in the near future.

Abdul Qadir Baloch said about one hundred thousand Internally Displaced Persons (IDPs) are living in camps while others are settled with their relatives. He said rupees twenty five thousand are being paid to each IDP family, but government is also considering increasing this package.

The Minister said a plan is under consideration for the socio-economic development of FATA.

The House also passed a resolution unanimously recommending the government to take steps to tender the contract of Reko Diq mines in Balochistan in a transparent manner.

The resolution was moved by Hafiz Hamdullah.

The House passed another resolution unanimously recommending the government to take immediate steps to provide clean drinking water to the people in Islamabad Capital Territory.

Briefly speaking on the occasion, Information Minister Pervaiz Rashid said there are 133 villages in the capital territory and out of these 65 are provided with the water supply schemes. He said fifty-five of these schemes are functioning properly while ten are non-functional due to different reasons.

Minister of State for Parliamentary Affairs Sheikh Aftab Ahmed said the government has taken a number of steps to improve overall performance of Pakistan International Airlines (PIA) and due to these measures the deficit will be reduced significantly by the end of this financial year.

Concluding the discussion on a motion regarding the overall performance of PIA moved by Muhammad Talha Mahmood, Aftab Sheikh said when the government took over, the total deficit of PIA was rupees 31.54 billion. He said after resuming the charge, the Prime Minister provided rupees 16 billion to the organization to meet the liabilities of the workshops.

The Minister said the government overall improved the management of PIA and the efficiency of the organisation has improved. He said measures are also being taken to provide quality service to the passengers.

Earlier, the House offered Fateha for the departed souls of the victims of Sabzi Mandi blast and father of Senator Haji Ghulam Ali.

Two bills were introduced in the House (Monday). They are the National Cyber Security Council Bill, 2014 and the Financial Institutions (Recovery of Finances) (Amendment) Bill 2014).