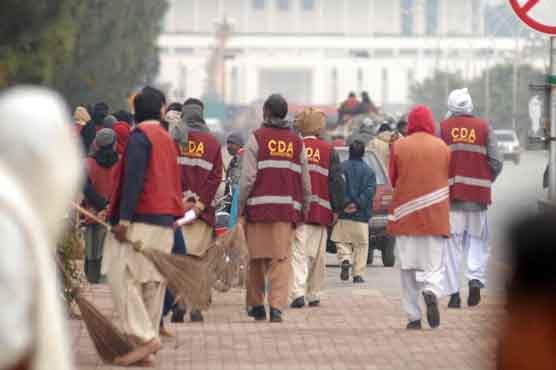 The exact damage to the environment is being accessed by Capital Development Authority.

ISLAMABAD: Capital Development Authority on Saturday has completed massive cleanup campaign and subsequent fumigation of the venue of the long march and sit-in and its adjoining areas.

The work on the improvement of environment especially rehabilitation of the green belts and median strips is in progress and new plantation is being made where required to make for the damage done during the procession at Jinnah Avenue and adjacent locations.

Chairman CDA, Syed Tahir Shahbaz who visited the spot to monitor the cleanliness operation being carried out by the different formations of the authority on second consecutive day appreciated the efforts of workers for putting extra efforts to bring Islamabad back to normal.

A lot of litter was scattered in different spots of Blue Area and Jinnah Avenue following the sit-in by a large number of people in the capital city.

A massive clean up campaign was launched by CDA immediately after return of the participants of sit-in to remove the litter and provide clean and friendly environment as well as to prevent spread of any epidemic in the federal capital.

Chairman CDA on the direction of the Secretary Cabinet, Ms Nargis Sethi cancelled Saturday’s weekly off of the relevant formations of the Authority including Sanitation, Health Services and Environment Wings.

During the visit, Chairman CDA was apprised that 150 workers of the Environment Wing are participating in the ongoing drive to rehabilitate the environment and plantation of fresh saplings as well as improving the green belts and median strips.

The Health Services Directorate of the Authority carried out fumigation and spray along Jinnah Avenue and adjacent portions of the Blue Area to prevent spread of any epidemic in the vicinity.

The cleanliness drive begin very next morning of the return of the participants of long-march, more than 200 sanitation workers took part in the operation to remove huge junk and garbage and other waste which mainly consist of plastic bottles, bags, food packs, sticks and peels of fruits etc.

The sanitation workers were equipped with the machinery and other necessary gadgets to help restore scene of the areas. The workers estimate more than 100 tons of the garbage and waste removed during the operation.

Chairman CDA said that Islamabad is a model city due to its natural environment, road infrastructure and landscape and CDA is striving hard to maintain this beauty. He said that the efforts of workers are laudable for returning the city to normalcy after removing huge quantity of left over waste and junks. He directed the Sanitation Directorate to further boost the efforts for better upkeep and cleanliness of the city.

Chairman CDA was apprised that Environment Wing of the Authority is carrying out fresh plantation and improving the belts along the green-belts and at busy crossings to help restore beautification of the area.

However, the exact damage to the environment is being accessed. During the two day operation, the sanitation staff of CDA removed the garbage on the first day and carried out micro cleanliness in the Blue Area and adjacent vicinity.

The Health Services Directorate of CDA sprayed and fumigate the areas twice during the clean up operation. CDA also provided back up support to the CDA administration during the long march and sit-in. More than 150 sanitary workers of CDA remained present round the clock to help maintain the cleanliness of the area. CDA also deputed the health workers at the two medical camps at the venue to provide necessary health care facilities as well as the ambulance service and fire-brigade of CDA were deputed on the scene in addition to a fleet of water tankers for providing clean drinking water to the participants.