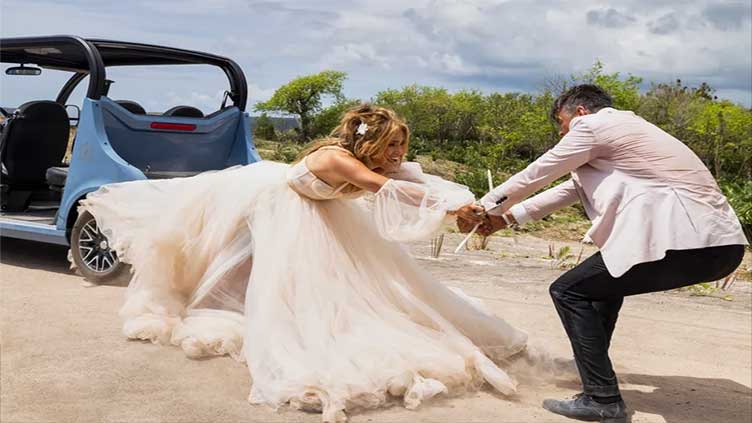 (Web Desk) - Josh Duhamel was filming a scene in the new action-rom com “Shotgun Wedding” in which his fiancé, played by Jennifer Lopez, throws a grenade up in the air. He hits it like a baseball into a bad guy who blows up and sets off a display of rainbow-colored fireworks.

“I was like, holy (expletive) this movie is bonkers,” Duhamel said.

The film, directed by Jason Moore, starts out like a regular romantic comedy. Lopez’s Darcy and Duhamel’s Tom are having a big destination wedding on an island. There’s funny and awkward family dynamics and a charismatic ex-boyfriend shows up too. And Darcy and Tom find themselves fighting and about to call off the wedding moments before they’re to walk down the aisle. Then a band of pirates armed with guns arrive and takes the wedding party hostage.

Lopez, who produced and stars, came to the Mark Hammer script through her producing partner Elaine Goldsmith-Thomas, — they’ve been been making films together since “Maid in Manhattan.”

“She’s kind of the architect of careers,” Lopez said. “We do really kind of think about not just what we want to do, but what the audience would enjoy or what the world needs at different times. I even do that as an artist with my albums and the things I want to put out in the world as a message.”

“Shotgun Wedding,” streaming Friday on Prime Video, was not just a fun genre mash up in a slick package, Lopez liked the idea that her character was getting married for the first time at an “older age” and that Tom was the “groomzilla,” obsessed with the details and logistics of planning the fete.

It took, she said, “Different things that people don’t think of as conventional and normal and making that thing regular and acceptable.”
The film was not exactly a hard sell for anyone involved. From Cheech Marin, who plays Darcy’s billionaire father, to Jennifer Coolidge, as Tom’s very normal Midwestern mother, everyone basically heard “Jennifer Lopez” and “Dominican Republic shoot” and signed up.

“It was a funny script,” Coolidge said. “We had a table read at the very beginning and I remember it was such a good table read. I remember thinking, ‘Oh my God, this is going to be really fun.’”

There was a hitch before they got to the island. Armie Hammer had been originally set to play Tom but he stepped away from the project after misconduct allegations surfaced, which he has denied. They were two weeks into prep and a pivotal role needed to be recast. Moore, a Broadway veteran, didn’t panic.

“There’s always a moment when the understudy has to go on,” Moore said. “It always works out. ... There were a couple of days of ‘Oh boy’ and it yielded something even more wonderful.”

Duhamel had been on Moore’s shortlist and had been friendly with Lopez for years.

“He’s an incredibly handsome 1940s movie star who’s not afraid to look vulnerable and silly,” Moore said. Duhamel and Lopez spoke over Zoom and decided it was a go.

“You really do need a certain kind of chemistry,” Lopez said. “This was not just romantic comedy chemistry. It’s more, you know, trusting each other and doing actions and doing stunts and also broad comedy. It was a lot.”

“It was so much better than I even imagined,” Lopez added. “We were just like right on the same wavelength.”
Coolidge also approved.

But of course pirates get in the way of some of that, and also promptly force the wedding guests to stand in a pool as their hostages while they try to find the fighting bride and groom. It was a lot of time partially submerged in water with about a dozen other people.
“I’m probably not supposed to say, but we didn’t change the water the whole time we were shooting,” said Coolidge.

D’Arcy Carden, who plays Marin’s new-agey and much younger girlfriend, said those 20 some days were a little humbling.

Marin and Steve Coulter, who played Coolidge’s husband, would even sometimes take naps in their soaking wet suits next to one another, of which Carden says she has photographic proof.

But aside from soggy shoes for two weeks, Carden said it was “as dreamy a situation as you could be in.”

Much of the cast even lived together in a giant house and would go out together most nights, which translated into a family-like atmosphere on set.

“It was like this weird sort of movie dorm,” Duhamel said. “But with a spa and a hot tub and a pool and a beach.”

Lenny Kravitz, as Darcy’s ex-boyfriend, even flies in (in a helicopter) to disrupt things.

“He’s an amplified sort of ridiculous version of, you know, a tiny part of what people think I am,” said Kravitz, a longtime friend of Lopez’s.
Moore wanted to make sure that the film looked “big and James Bond and lux. Sometimes action rom coms can look kind of small,” he said.

And all were impressed by Lopez, who doesn’t act the “movie star” part on set. During a day filming scenes on a small boat in the open water, Lopez went into producer mode and decided they didn’t need an extra boat for her makeup person to be out there with them. She could do her makeup herself. And she nailed it, Moore said.

“She is a mogul and a producer and a storyteller, an actress, a singer and a brilliant physical comedienne,” Moore said. “She’s got discipline and she’s got artistic finesse which is a wonderful combo. She really can do everything.”